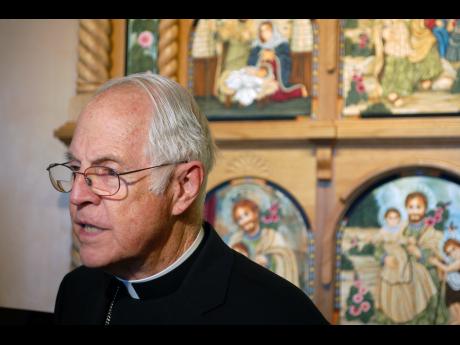 AP
Former Archbishop Michael Sheehan talks at the first inquiry in Albuquerque to present evidence on why Sister Blandina Segale should become a saint.

Supporters and researchers presented their case before the Archdiocese of Santa Fe at a ceremonial 'first inquiry' in Albuquerque on why Sister Blandina Segale should become a saint. The public inquiry, headed by former Archbishop Michael Sheehan, was aimed at determining if there was enough evidence to move her case through the largely secret process through the Vatican.

Witnesses said during her life, Segale fought against the cruel treatment of American Indians and sought to stop the trafficking of women as sex slaves. They also testified that in death, Segale has helped cancer patients and poor immigrants who have prayed to her for help.

Victoria Marie Forde of the Sisters of Charity of Cincinnati said documents showed Segale went out of her way to provide assistance to Italian-American immigrants and protect Mexican-Americans facing violence in western territories.

"Sister Blandina as a canonised saint will lead and strengthen thousands of others to see that they, too, can fight injustice with compassion and untiring ingenuity," she said.

Last year, the archdiocese received permission from the Vatican to open her sainthood cause. It's the first time in New Mexico's 400-year history with the Roman Catholic Church that a decree opening the cause of beatification and canonization has been declared, church officials said.

Segale, a nun with the Sisters of Charity of Cincinnati, came to Trinidad, Colorado, in 1877 to teach poor children and was later transferred to Santa Fe, where she co-founded public and Catholic schools. During her time in New Mexico, she worked with the poor, the sick and immigrants. She also advocated on behalf of Hispanics and Native Americans, who were losing their land to swindlers.

Her encounters with Old West outlaws later became the stuff of legend and were the subject of an episode of the CBS series, Death Valley Days. The episode, called 'The Fastest Nun in the West', focused on her efforts to save a man from a lynch mob.

But her encounters with Billy the Kid remain among her most popular and well-known Western frontier adventures.