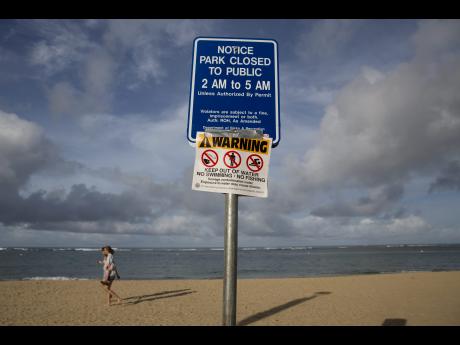 The beach area was closed Monday after storm water flowed into the city's sewage system as a weather system linked to Tropical Storm Kilo dumped heavy rain on the islands.

The inundation overwhelmed the sewage system, causing 500,000 gallons of wastewater to spew from manholes, said Lori Kahikina, Honolulu's director of environmental services. "Now's not the time to go swimming," she told reporters.

It could be a couple of days before the ocean is clear enough for people to enter, Kahikina said. It would likely take that long for water samples to be tested for safety, she added.

Waikiki is home to many of the state's biggest hotels and is the engine of Hawaii's tourism-dependent economy.

The city is advising people to avoid a four-mile stretch of waterfront from Kapahulu Avenue in Waikiki to Point Panic in Kakaako. Sewage came out of manholes at Ala Moana Beach Park, on a street fronting a shopping mall at the edge of Waikiki and a pumping station.

Waikiki was not the only area of Oahu that was affected by an overflow of wastewater. The state Department of Environmental Services said Monday that Kailua, Kaneohe and Kalanianaole Highway in Aina Hina also experienced overflowing sewer systems. The Department of Health issued warnings for people to stay out of the water in all affected areas, including Kaneohe and Mamala bays.