US television reporter and cameraman shot to death during live broadcast 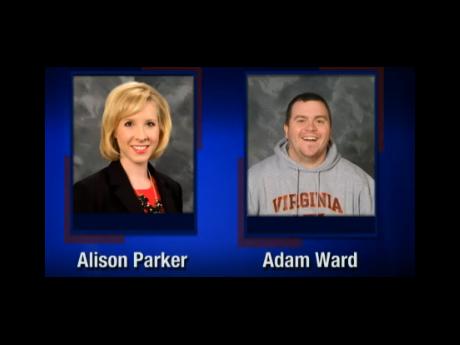 A television reporter and cameraman were shot to death on the air during a live broadcast this morning from a shopping center in Virginia.

Video shows Parker interviewing someone about tourism on Bridgewater Plaza in Franklin County.

She was smiling when suddenly at least eight shots were heard.

Parker screams, runs and can be heard saying, "Oh my God."

As the camera drops to the ground, it captures what appears to be a fleeting image of the shooter.

The person is wearing black pants and a blue top and appears to be holding a handgun.

The station then switches back to a shot of an anchor back at the station, who appears shocked and says, "OK, not sure what happened there. We will of course let you know as soon as we find out what those sounds were from."

In a tweet, the station said: "We love you, Alison and Adam."

Marks said police "are working very diligently to track down both the motive and the person responsible for this terrible crime against two fine journalists."

Parker just turned 24 and attended James Madison University, where she was the editor of the school's newspaper, The Breeze.

She also had been an intern at WDBJ-TV.

According to her Facebook page, Parker was an avid kayaker and theatergoer.

Her boyfriend, WDBJ anchor Chris Hurst, said they hadn't shared their relationship publicly but "were very much in love." He said they had just moved in together and wanted to get married.

The station's website says Ward was 27 and a graduate of Virginia Tech.

He was engaged to a producer at the station, Melissa Ott, said WDBJ spokesman Mike Morgan.

"Adam was our go-to guy. He pretty much was available to do anything that we asked," Morgan said. "He did live shots during our morning show for several years."

The station is based in Roanoke, Virginia, and serves the southwest and central part of the state. The shopping mall where the incident happened is just off Smith Mountain Lake in Moneta, about 25 miles southeast of Roanoke.