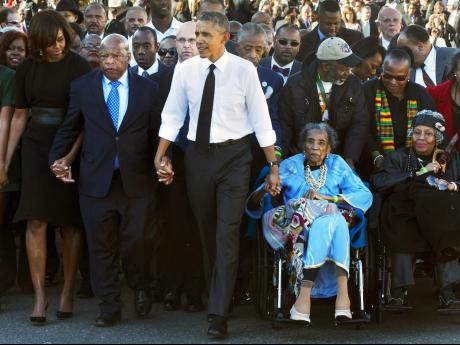 AP
President Barack Obama (centre) holds hands with Representative John Lewis, D-Georgia (left) and Amelia Boynton Robinson (right), who were both beaten during Bloody Sunday, as they walk across the Edmund Pettus Bridge in Selma, Alabama, for the 50th anniversary of Bloody Sunday.

Boynton Robinson was among those beaten during the march across the Edmund Pettus Bridge in Selma, Alabama, in March 1965, the day that became known as Bloody Sunday. State troopers tear-gassed and clubbed marchers as they tried crossing the bridge. A newspaper photo featuring an unconscious Boynton Robinson drew wide attention to the movement.

"The truth of it is that was her entire life. That's what she was completely taken with," Bruce Boynton said of his mother's role in shaping the civil rights movement. "She was a loving person, very supportive - but civil rights was her life."

Fifty years after Bloody Sunday, Barack Obama, the first black president of the United States, held her hand as she was pushed across the bridge in a wheelchair during a commemoration.

"She was as strong, as hopeful, and as indomitable of spirit - as quintessentially American - as I'm sure she was that day 50 years ago," Obama said yesterday in a written statement. "To honor the legacy of an American hero like Amelia Boynton requires only that we follow her example - that all of us fight to protect everyone's right to vote."

With family at the end

Boynton Robinson, hospitalised in July after a stroke, turned 104 on August 18. Her family said in a written statement that she was surrounded by loved ones when she died at approximately 2:20 a.m. at a Montgomery, Alabama hospital.

In January, Boynton Robinson attended the State of the Union address as a special guest of Representative Terri Sewell, D-Alabama, who said Boynton Robinson's 1964 run for Congress paved the way for her as Alabama's first elected black congresswoman. Boynton was the first black woman to run for Congress in the state and the first Alabama woman to run as a Democrat, according to the Encyclopedia of Alabama.