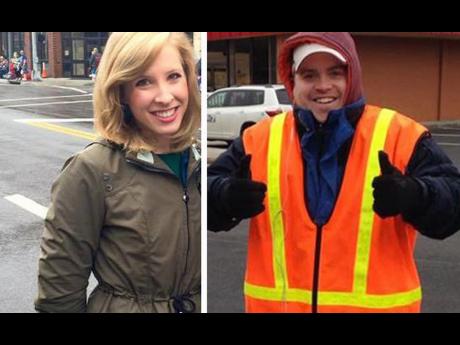 A TV reporter and cameraman were shot to death, during a live television interview yesterday, by a gunman who recorded himself carrying out the killings and posted the video on social media after fleeing the scene.

Authorities identified the suspect as a journalist who had been fired from the station earlier this year. Hours later, he ran off the road and a police officer found him with a self-inflicted gunshot wound. He died at a hospital later.

The shots rang out on-air as reporter Alison Parker and cameraman Adam Ward were presenting a local tourism story at an outdoor shopping mall. Viewers saw her scream and run, and she could be heard saying "Oh my God," as she fell.

Ward fell, too, and the camera he had been holding on his shoulder captured a fleeting image of the suspect holding a handgun.

WDBJ quickly switched back to the anchor at the station, her eyes large and jaw dropping as she said, "OK, not sure what happened there." The station later went live again, reporting on their own station and staff as the story developed.

Parker and Ward were killed as the gunman fired about 15 shots. Their interview subject, Vicki Gardner, was in stable condition later yesterday after undergoing surgery for her wounds.

The gunman was Vester Lee Flanagan II, 41, of Roanoke, who appeared on WDBJ as Bryce Williams, authorities said.

Jeffrey Marks, WDBJ's president and general manager, said Flanagan had to be escorted by police out of the station when he was fired. Marks described him as "an unhappy man" and "difficult to work with", always "looking out for people to say things he could take offense to".

"Eventually, after many incidents of his anger coming to the fore, we dismissed him. He did not take that well," Marks explained.

Video posted hours after the shooting on Bryce Williams' Twitter account and Facebook page showed an outstretched arm holding the handgun and firing repeatedly at Parker as she tried to run away.

The shooter appeared to walk up to the victims and stand close by from them while holding the weapon. The three, in the midst of a live TV interview, do not seem to notice the gunman, who doesn't start shooting until Ward points the camera at Parker.