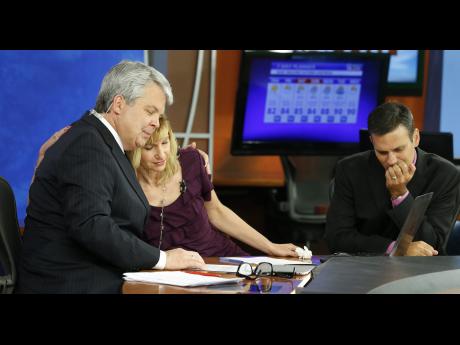 AP
WDBJ-TV7 news morning anchor Kimberly McBroom (centre) gets a hug from visiting anchor Steve Grant (left) as meteorologist Leo Hirsbrunner reflects after their early morning newscast at the station yesterday in Roanoke, Virginia. Reporter Alison Parker and cameraman Adam Ward were killed during a live broadcast Wednesday, while on assignment in Moneta. 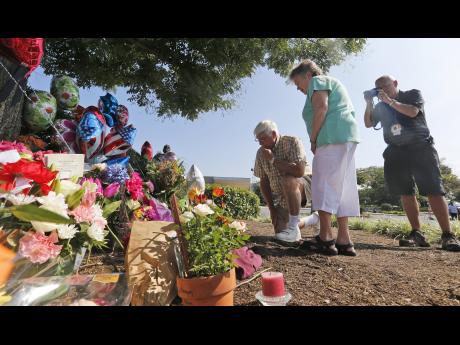 AP
Dale and Edith Bryant, of Botetourt County, Virgina, look over a memorial for the two slain journalists in front of the studios of WDBJ-TV7 in Roanoke.
1
2

One day after the on-air killings of a reporter and a cameraman shocked millions across the world, the grieving staff at WDBJ-TV came together yesterday for an emotional broadcast of its Mornin' show.

At 6:45 a.m., the time of the shooting that took the lives of reporter Alison Parker and cameraman Adam Ward, the station observed a moment of silence, showing the victims' photos on the screens.

The fatal shooting happened during a live TV interview as tens of thousands of viewers watched. Within hours, the carefully scripted carnage carried out by a disgruntled former colleague spread to millions of viewers gripped by what had transformed into a social media storm.

Shortly after the shooting, social-media posts referencing the slain TV pair surfaced on an account under an on-air pseudonym used by the gunman, culminating with a first-person video of the ambush filmed by the shooter.

Anchor Kim McBroom, who was on the anchor desk during Wednesday's shooting and tried to reassure viewers immediately after the attack was broadcast, joined hands yesterday morning with weatherman Leo Hirsbrunner and fellow anchor Steve Grant, who came in from sister station KYTV in Springfield, Missouri.

"Joining hands here on the desk. It's the only way to do it," she said just before the moment of silence.

During his forecast yesterday morning, Hirsbrunner's voice trembled as he recalled how Ward would check in with him every morning about the weather before going out on assignment.

"I don't even know how to do weather on a day like this," he said. McBroom told him: "Good job, partner. We're going to get through this together."

The morning broadcast included a series of news pieces on the shooting. One looked at the criminal investigation of gunman Vester Lee Flanagan II, the former WDBJ-TV reporter known to viewers by his on-air name Bryce Williams. He died of a self-inflicted gunshot wound hours after the shooting.

His family released a state-ment through a representative, expressing condolences for the victims' families and asking for privacy: "Words cannot express the hurt that we feel," it read in part.

The social-media post made Wednesday through an account under the Bryce Williams name had a 56-second video clip. It shows Flanagan quietly approach Parker and Ward, gun in hand, as they conduct an interview. Ward's camera was aimed at the mini-golf course nearby instead of the reporter. So the shooter waited - cursing Parker under his breath - for 20 seconds until the live television picture was back on the reporter. Then he fired eight shots without saying a word.

The attack seemed carefully planned. Flanagan was captured in a rental car he reserved at some point before the shootings. His own Mustang was found abandoned at the local airport, Franklin County Sheriff Bill Overton said.

The interview was done at a shopping centre not yet open for the day at a remote lake in Moneta, some 25 miles away from WDBJ's studios in Roanoke. The station promoted where the reporter would be, including a plug on Twitter just a half hour before the shooting.

About three hours after the killing, ABC News reported it received a 23-page faxed statement from someone named Bryce Williams.

Unlike so many crimes, which have to be pieced together in reverse, this one played out in real time on Twitter and Facebook. The station's live footage of the shooting was being shared over and over before even station managers knew the fate of their employees.

Some 40,000 viewers had initially tuned in, including the local sheriff, and heard Parker scream. They saw her run as the camera fell, capturing a fleeting image of a man holding a handgun.

It wasn't Flanagan's first encounter with the pair. The 41-year-old had been fired by the station in 2013 and had to be escorted out of the building, President and General Manager Jeffrey Marks said.

On Twitter, Flanagan described workplace conflicts with both of his victims. He said Parker had made racist comments and that she was still hired after he filed a complaint with the Equal Employment Opportunity Commission. Ward had reported him to human resources, he said.

Flanagan alleged that other employees made racially tinged comments to him, but his EEOC claim was dismissed

and none of his allegations could be corroborated, Marks said.

Dan Dennison, now a state government spokesman in Hawaii, was the WDBJ news director who hired Flanagan in 2012 and fired him in 2013, largely for performance issues, he said.

"We did a thorough investi-gation and could find no evidence that anyone had racially discriminated against this man," Dennison said. "You just never know when you're going to work how a potentially unhinged or unsettled person might impact your life in such a tragic way."

Flanagan was fired at least twice from small-market stations after managers said he caused problems with other employees.

In the fax to ABC, Flanagan called himself a gay black man who had been mistreated by people of all races. He said he bought the gun two days after nine black people were killed in a June 17 shooting at a Charleston, South Carolina, church and wanted to use it to retaliate for what authorities called a racially motivated shooting. The federal Bureau of Alcohol, Tobacco, Firearms and Explosives said the gun was purchased legally.

The fax also included admiration for the gunmen who carried out mass killings at Virginia Tech in 2007 and Columbine High School in Colorado in 1999.

He described himself as a "human powder keg" that was "just waiting to go BOOM!!!!"

Also appearing on yesterday's show was Tim Gardner, husband of Vicki Gardner, a local economic development official who was wounded in the shooting as she was being interviewed. He appeared outside the station before a memorial full of balloons, candles and other tokens to the victims. Nearby, media outlets from around the US filmed live shots.

Tim Gardner said his wife is doing better and is in fair condition.

Both Parker and Ward had worked at other stations, but a return to Roanoke meant a return to the area where they grew up. Ward was engaged to station producer Melissa Ott, who watched from the control room as he was shot, and was known as a happy-go-lucky guy who seldom missed a football game at his alma mater, Virginia Tech. Parker had been dating a fellow anchor at WDBJ, Chris Hurst, who called her "the most radiant woman I ever met".

He appeared on the broadcast yesterday morning, saying he wanted to tell Parker's story even as he grieved.

"Alison, what great things she could have done," he said.