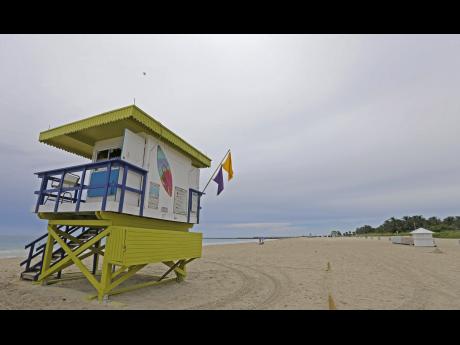 All of Florida is carefully watching Tropical Storm Erika as the disorganised system makes its way over Hispaniola.

Forecasters at the National Hurricane Center in Miami said that as of 11 a.m. today, the forecast showed the storm hitting the state Monday.

The forecast path has Erika skirting the state's Gulf Coast and then moving up Florida's spine north of Tampa.

The next 24 hours will be critical in the storm's development, hurricane center meteorologist James Franklin said.

There's still uncertainty in the track because Hispaniola's mountains could disrupt or break up the storm.

It is too early to tell whether the storm will bring flooding to areas of the Tampa Bay region that experienced problems in recent weeks due to heavy rain, Hurricane center spokesman Dennis Feltgen said.

"It's way too early to tell how much rainfall we'll see in Florida," Feltgen said.

Feltgen said that the entire state of Florida, along with parts of Georgia and South Carolina, could see heavy rain in the coming days.

Some rain would be welcome in South Florida, where there's been a drought. But Feltgen said that a lot of rain all at once in a dry area would also cause problems.

In the Tampa Bay area, counties that were hit hard by recent rainstorms are watching the storm carefully. Pasco County received record levels of rain in July and August — and it wasn't even from a tropical storm or hurricane. FEMA is still doing damage assessments there, and a few dozen homes were destroyed.

Scott made his declaration shortly after forecasters adjusted the trajectory of the storm to show that it's predicted to strike the southern tip of the state and then traverse northward.