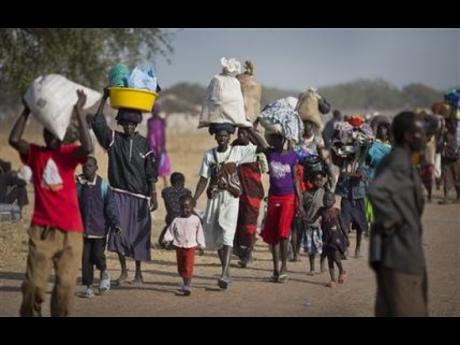 AP File
In this Thursday, Jan. 2, 2014 file photo, displaced people walk to find an unoccupied patch of ground where they can rest after arriving by river barge from Bor, some of the thousands who fled fighting between government and rebel forces in Bor by boat across the White Nile, in the town of Awerial, South Sudan.

JUBA , South Sudan (AP) -- Government troops on Sunday attacked a village in South Sudan's volatile Unity state on the first day of a cease-fire that both sides have pledged to implement, according to a rebel-appointed official in the state.

The attack on the village in Mayendit County followed attacks on two other villages in the same area Saturday night, John Riek, who coordinates relief activities in an opposition-held part of southern Unity state, told The Associated Press on Sunday.

He said government troops were burning houses and looting livestock on Sunday, and that he himself had to hide in a swamp to escape the violence.

AP could not independently verify his claims.

Military spokesman Col. Philip Aguer said he was unable to verify reports of clashes. Rebel spokesperson James Gatdet Dak said he has not received reports of new clashes. The two sides accused each other of instigating clashes in Upper Nile state yesterday.

Southern Unity has witnessed chaotic violence between the two sides in recent months following a government offensive against rebel forces. Doctors Without Borders said last week it treated 50 people including women and children for gunshot wounds in the town of Leer over the past month.

Kiir on Wednesday signed a compromise peace agreement, including the cease-fire, following mediation by the leaders of neighboring countries and with U.N. backing. Machar had signed the same document earlier in Ethiopia.

Before signing it, Kiir called the agreement flawed, citing many reservations. Rebels have since said those reservations indicate Kiir is not committed to implementing the entire agreement.

The U.S. has said it will press sanctions against those who violate the accord.