Erika dissipates after killing at least 20 in Caribbean 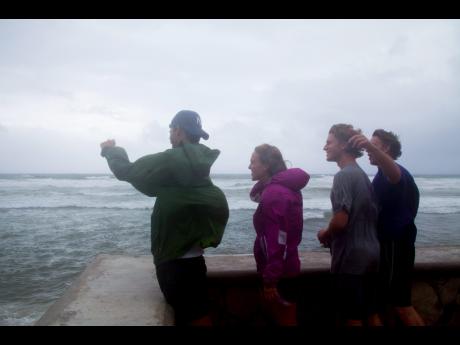 AP
One Dominican (left) and three Americans take pictures of themselves standing against the wind of Tropical Storm Erika, as it approached Santo Domingo, in the Dominican Republic, last Friday.

Tropical Storm Erika dissipated early yesterday, even as its remnants began drenching parts of eastern Cuba. But it left devastation in its path, killing at least 20 people and leaving another 31 missing on the small eastern Caribbean island of Dominica.

In Haiti, one person died in a mudslide just north of Port-au-Prince, and at least four others were killed in a traffic accident that apparently occurred in the rain.

The United States National Hurricane Center in Miami said the storm had degenerated into a trough of low pressure by early yesterday after mountains and an unfavourable environment in Hispaniola knocked Erika below tropical storm force.

No damage in Santiago

The eastern Cuban city of Santiago was hit by about two hours of heavy rain as the storm was falling apart yesterday morning. Residents reported no flooding or other damage, saying they wished it would rain more to help alleviate a months-long drought that has hit eastern Cuba particularly hard.

Dominica Prime Minister Roosevelt Skerrit said in a televised address late last Friday that damage inflicted by the storm set that island back 20 years. Some 15 inches (38 centimetres) of rain fell on the mountainous island.

"The extent of the devastation is monumental. It is far worse than expected," he said, adding that hundreds of homes, bridges and roads have been destroyed. "We have, in essence, to rebuild Dominica."

At least 31 people have been reported missing in Dominica, according to officials with the Barbados-based Caribbean Disaster Emergency Response Agency. The island's airports remained closed late yesterday, and some communities were still isolated by flooding and landslides.

"This is a period of national tragedy," said Skerrit. "Floods swamped villages, destroyed homes and wiped out roads. Some communities are no longer recognisable."

Before dissipating, Erika also knocked out power to more than 200,000 people in Puerto Rico and caused more than $16 million in damage to crops there, including plantains, bananas and coffee.

In Haiti, authorities evacuated 254 prisoners in Gonaives to other locations because of flooding, and two people were hospitalised after their home in Port-au-Prince collapsed in heavy rains.