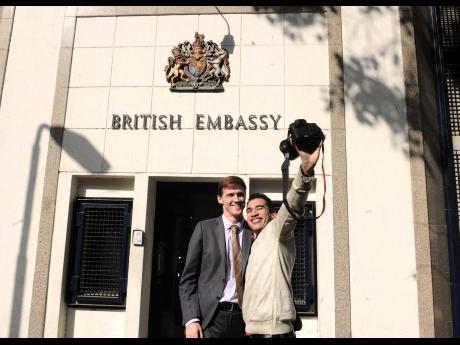 Egypt's Foreign Ministry summoned the British ambassador in Cairo on Sunday to protest comments he made after a judge sentenced three Al-Jazeera English journalists to three years prison each for reporting "false news".

The ministry said in a statement that John Casson's comments were "unacceptable interference" in the country's judiciary, and "incompatible with diplomatic norms and practices". In a post on Twitter, spokesman Ahmed Abu Zeid said Egypt "rejects any foreign criticism of judicial verdicts".

Speaking to television cameras in Arabic after the verdict, Casson said he was "shocked and concerned by the sentences", in a case that is of "profound interest to Egyptians because it has become a symbol of the basis for stability in the new Egypt".

"I am concerned that today's ruling will undermine confidence in the basis of Egypt's stability, both in Egypt and abroad," he said.

Several other foreign diplomats at the trial also condemned the verdict, but Casson may have been the only one to speak in Arabic to domestic television stations. The United States, the European Union, the United Nations and human rights advocacy groups and press freedom organisations also sharply criticised it.