Bones found during road project may be Spanish flu victims 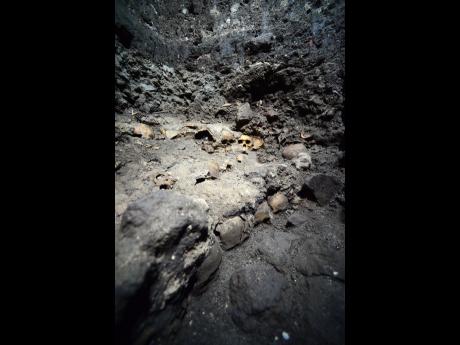 It was a morbid discovery along a Schuylkill County highway - a scattering of human bones, including a leg, ribs, skull fragments, and a piece of jawbone.

The bones had been resting below a grass-covered stretch for a century or so as the country road alongside it grew into Route 61, taking traffic from Interstate 78 through the anthracite patches.

This month, state road crews cut into the embankment just south of the Schuylkill Haven border to widen the highway. When they returned a few days later, on August 13, they found that heavy rain had washed away layers of dirt, exposing bones belonging to three people, along with some coffin nails.

Cadaver dogs detected several spots of interest, now pinned with flags. The 2.25-acre property is considered a crime scene by the coroner's office, but authorities already have a suspect.

"Our working diagnosis is that it was related to the mass epidemic of 1918," said the Schuylkill County coroner, Dr David Moylan III.

Erroneously believed to have begun in Spain, the virus spread quickly around the globe during the final year of World War I and infected as many as 50 million people by the time it disappeared in 1919. It appears to have leapt from birds to humans.

In October 1918, the flu hit the coal region hard. People in Schuylkill County were quarantined, out-of-town doctors were summoned and the dead piled up. Some of the dead lay in homes for days, while others were quickly buried - if they were lucky - in pine boxes.

Many, apparently, were buried unceremoniously in an unmarked mass grave. Area residents remember their parents referring to that plot of land along Route 61 as a cemetery where the flu victims were piled. A Schuylkill County Historical Society member has talked about walking the field as a child, maneuvering around mounds that she presumed were graves.

The remains along Route 61 were collected by a team from Mercyhurst University in Erie and taken to the campus for analysis. The forensic team, which also investigates present-day homicide cases, is analysing the bones to learn the gender, height and ancestry of the three people whose remains were found.

Those experts are also looking for signs of blunt-force trauma - an indication of a crime or accidental injury.