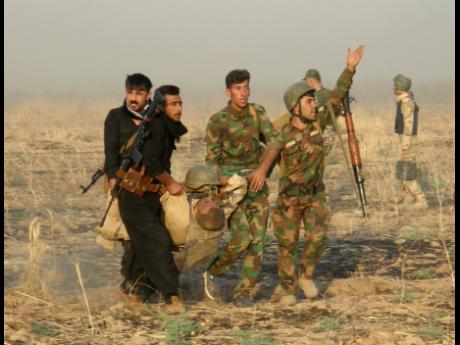 AP
An injured Kurdish officer is taken for treatment during a military operation to regain control of some villages from Islamic State group fighters south of the oil-rich city of Kirkuk, 180 miles (290 kilometres) north of Baghdad, Iraq.

A series of suicide attacks by the Islamic State (IS) group outside a town in Iraq's western Anbar province yesterday killed 12 soldiers and allied Sunni militiamen, military and hospital officials said.

They said the attack began when IS militants shelled army and militia positions outside the town of Haditha with mortars. They followed up with two suicide bombers, who blew themselves up near the troops, and later with three suicide car bombings. Five soldiers and three Sunni tribesmen were wounded in the attacks, the officials said.

Airstrikes by the United States-led alliance destroyed six IS vehicles and killed 13 militants as they approached the site where heavy clashes erupted, said the officials, who spoke on condition of anonymity because they were not authorised to speak to the media.

Much of the vast and predominantly Sunni Anbar province is under IS control, including the provincial capital, Ramadi, and the key city of Fallujah. Haditha, on the Euphrates river and home to a major dam and hydroelectric power station, is in government hands. The IS group, which controls most of northern and western Iraq, has repeatedly tried to seize the town.

The United Nations said yesterday that a total of 1,325 Iraqis were killed and another 1,811 were wounded in violence during the month of August. Of those killed, 585 were civilians, it said.

Baghdad province, which includes the capital and its outlying districts, was the worst-affected part of the country, with 318 killed and 751 injured, said the United Nation Assistance Mission for Iraq in its monthly report.

The figures for civilian casualties in August were sharply down from the previous month, when 844 were killed, and the lowest since April.

A further 488 members of Iraq's security forces, including Kurdish peshmerga fighters, Interior Ministry SWAT forces and tribal militiamen, were killed and another 492 were wounded in August. The figures don't include casualties in Anbar, where intense fighting has raged for close to two years.