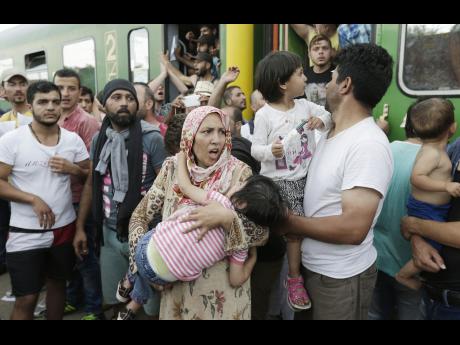 AP
A woman carrying a child stands outside a train with migrants that was stopped in Bicske, Hungary, yesterday. Over 150,000 migrants have reached Hungary this year, most coming through the southern border with Serbia. 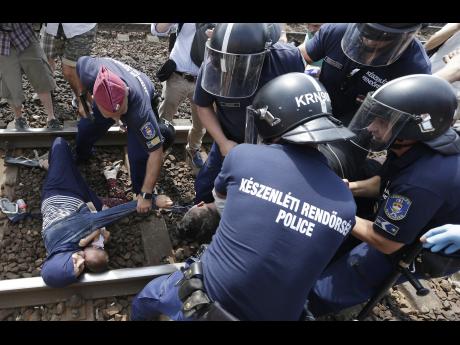 AP
A migrant holding her child is detained in Bicske, Hungary, yesterday.
1
2

At the Hungarian town of Bicske, migrants were shocked to find out that their train was not heading to Austria but to a Hungarian migrant camp. Scores of police in riot gear were there to greet them.

The migrants started chanting "No camp!" in Arabic. Some tried to flee on foot. One family sat down beside the tracks and appealed to journalists for help.

When police told the media to move away, the husband in apparent desperation threw his wife and infant on to the tracks. Laying beside them, he started shouting, "We won't move from here!"

Police in helmets and body armour surrounded the prone family and detained the man. The woman and infant were escorted off the tracks.

Other migrants scuffled with police and forced their way back onto the train, where hours-long standoff in the sweltering sun began.

"We don't need food and water. Just let us go to Germany," one migrant said from an open train window.

In the meantime, Greece said it does not see an end to the flood of refugees and migrants anytime soon.

He said this flow of migrants is expected to continue in September and October "until conditions change".

He said the vast majority of migrants were reaching five eastern Greek islands with Lesbos seeing 50 per cent of arrivals, followed by Kos with 28 per cent. The other hard-hit islands were Chios, Samos and Leros.

Meanwhile, news that that Canada rejected the application of a Syrian family whose mother and two young sons drowned this week trying to get to Europe had an immediate impact on the Canadian election campaign.

Trudeau said, "You don't get to suddenly discover compassion in the middle of an election campaign. You either have it or you don't."

The Canadian election is October 19.

Turkish President Recep Tayyip Erdogan has accused Western nations of indifference to the plight of refugees, saying they shared the blame for the deaths of migrants off the coast of Turkey. He said Turkey was hosting close to two million refugees, in contrast to about 200,000 in total being hosted by "many times more" prosperous Western countries.

German Chancellor Angela Merkel has renewed her call for binding quotas to spread out tens of thousands of migrants among the European Union's 28 countries.

During a visit to Switzerland, Merkel said she discussed the issue with French President FranÁois Hollande yesterday morning. She said they agree that "for those who need protection ... we need binding quotas within the European Union to share the task."

She stressed that a country's size and economic strength will be taken into account "but otherwise we will not cope with this question".

Germany has taken in more migrants than any other European Union country. It expects 800,000 new arrivals this year.