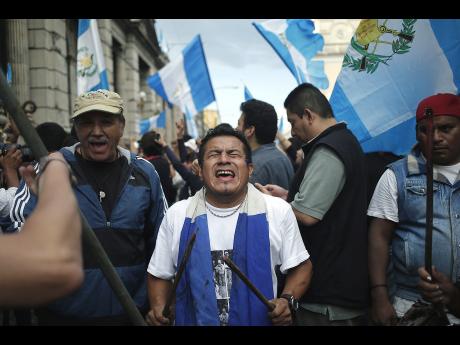 AP
Demonstrators react in jubilation in front of the Guatemalan Congress building as they hear the news that Congress has voted to withdraw President Otto Perez Molina's immunity from prosecution, in Guatemala City.

Guatemalan President Otto Perez Molina resigned in the face of a corruption scandal that has brought his government to the brink, and arrived at court yesterday morning to hear the charges against him.

Spokesman Jorge Ortega said Perez Molina submitted his resignation at midnight on Wednesday, local time, after a judge issued an order to detain him in the customs fraud case, which already has led to the jailing of his vice president, and the resignation of several cabinet ministers who withdrew their support for the president.

His resignation, the first by a Guatemalan president, is not effective until members of Congress accept it and name a new president.

Security was tight around the courthouse where Perez Molina appeared yesterday, with scores of police and members of the presidential guard stationed around the building.

Only a few protesters with drums and whistles had arrived by the time the president entered the building.

Earlier in the day, Perez Molina gave an interview to a local radio station, saying he didn't "trust Guatemalan justice", criticising the nation's prosecutors and the United Nations com-mission that have mounted a huge investi-gation in the fiscal fraud case he was implicated in.

Rights advocates and other Guatemalans were pleased with the detention order against the president and his subsequent resignation.

"This strengthens the rule of law," Jorge de Leon, Guatemala's human rights prosecutor, said of the detention order against Molina Perez and his subsequent resignation. "No one in the country is above the law."

A growing protest movement brought together Guatemalans from all walks of life demanding that Perez Molina step down. Business leaders and even Catholic church officials had called for Perez Molina to resign in recent weeks as the investigation of the customs fraud ring has grown wider and hit more officials.