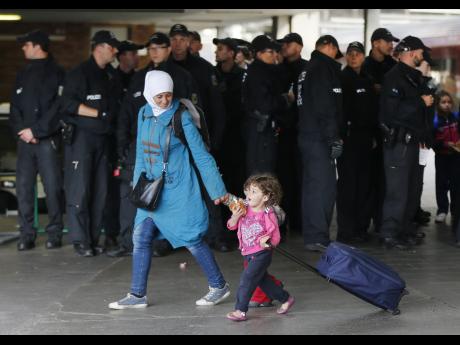 AP
Refugees pass police officers as they arrive at the main train station in Munich, southern Germany, yesterday. Hundreds of refugees arrived in various trains to get first registration as asylum seekers in Germany.

Before dawn, they clambered off a fleet of Hungarian buses at the Austrian border to find a warm welcome from charity workers offering beds and hot tea. Within a few more hours of rapid-fire assistance, many found themselves whisked by train to the Austrian capital, Vienna, and the southern German city of Munich, where onlookers cheered their arrival and children were handed candy and stuffed animals.

The surprise overnight effort eased immediate pressure on Hungary, which has struggled to manage the flow of thousands of migrants arriving daily from non-EU member Serbia. But officials warned that the human tide south of Hungary still was rising, and more westward-bound travelers arrived in Budapest within hours of an exodus from the capital's central rail station.

WALKING TO THE BORDER

The apparent futility of stopping the migrants' progress west was underscored when Hungary announced yesterday that its bus service to the border had finished and would not be repeated. Almost immediately, two groups hit the pavement to start walking to the border: about 200 people who walked out of an open-door refugee camp near the city of Gyor, and about 300 who left Budapest's central Keleti train station, the epicenter of Hungary's recent migrant crisis. Hundreds more were making their way independently to the border on foot and normal train services.

A spokesman for Austria's Interior Ministry, Karl-Heinz Grundboeck, said about 6,500 asylum seekers have crossed the border Saturday from Hungary and most have travelled by train to Vienna or beyond.

German federal police spokesman Simon Hegemueller said 1,600 already had arrived at Munich's central station and that figure was expected to reach 3,000 by closing time after midnight.

Hungarian authorities had spent most of the week trying to force those pouring into the country to report to government-run refugee centres to apply for asylum in their initial EU entry point as the 28-nation bloc's rules require. But thousands refused - some expressing fears that Hungary would deport or detain them indefinitely - and demanded free passage overwhelmingly to Germany.

After a three-day standoff with police, thousands marched west Friday from the Keleti station along one of Hungary's main motorways and camped overnight in the rain by the roadside. Hundreds more broke through police lines at a train station in the western town of Bicske, where police were trying to take them to a refugee camp, and blocked the main rail line as they, too, marched west.

Austria and Germany made the breakthrough possible by announcing they would take responsibility for the mass of humanity already on the move west or camped out in their thousands at Keleti. Hungary on Tuesday had suspended train services from that station to Austria and Germany, compounding the build-up there as it sought to compel the visitors to register for asylum locally.