Merkel to hold crisis talks as migrants stream into Germany 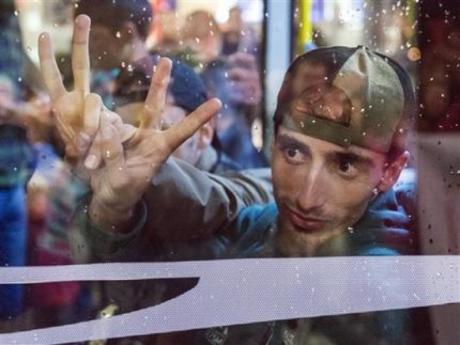 AP photo
Refugees show the victory sign behind a bus window as they leave the train station in Saalfeld, central Germany, Saturday, Sept. 5.

BERLIN (AP) -- Chancellor Angela Merkel planned to discuss Europe's migrant crisis with her coalition partners Sunday, as Syrians, Iraqis and others fleeing war and persecution streamed into Germany for the second straight day.

The Christian Social Union, the socially-conservative wing of Merkel's center-right bloc, has criticized the decision to open Germany's borders to migrants and refugees stuck in Hungary, the dpa news agency reported.

Meanwhile, the center-left Social Democrats, the third member of Merkel's three-party coalition, urged swift humanitarian help for those trekking through Europe in search of a better life.

"No decent person can remain cold and dismissive in the face of such suffering," said Thomas Oppermann, a senior Social Democrat.

He added that refugees should be fairly distributed in Europe, and countries should not avoid their responsibilities. "Whoever refuses to do their part calls into question whether they can be part of Europe."

German officials have been particularly angry at Hungary for encouraging migrants to keep traveling westward, instead of providing them with adequate shelter and the chance to apply for asylum there.

Thousands arrived in Germany by way of Austria by train, bus and car on Saturday. Most went to Munich, the Bavarian capital, where authorities said some 7,000 people were registered and over half received a bed for the night.

Special trains also took 570 people to the Thuringian town of Saalfeld. More than half of them were taken onward to Dresden, where a school for German army officers has been cleared to provide temporary shelter for 350 newcomers.

Other trains brought migrants to Hamburg in the north and Dortmund in the west of the country, while more than 300 people traveled to the capital Berlin on specially chartered buses.

At each stop the migrants were received with cheers, bags of food and toys for the children.

Most Germans have been welcoming of the migrants. But far-right groups have protested their arrival, including in Dortmund overnight.

Chancellor Merkel has warned that extremist groups might try to take advantage of the situation to stoke people's prejudices against refugees. Authorities estimate that up to 800,000 people could apply for asylum in Germany by the end of the year.

Germany's opposition Left Party, meanwhile, said the United States was to blame for the migrant crisis originating in the Middle East because it had indirectly supported terrorist groups in the region.

"If the German government had a little bit of courage it would at least ask the United States, as the main cause of the refugee tragedy, to pay some of the costs," dpa quoted Sahra Wagenknecht, a senior Left Party lawmaker, as saying.