UK says int'l aid budget to be used for refugees 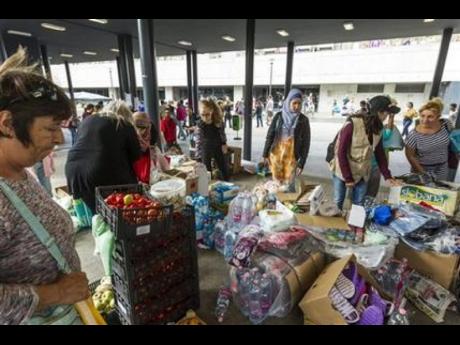 AP photo
Migrants select among donated goods in the subway in front of Keleti railway station in Budapest, Hungary, Sunday, Sept. 6, after several trains carrying migrants to the Austrian border departed from the station easing pressure after days of tensions between protesting migrants prevented from travelling.

BERLIN (AP) -- The latest news as countries across Europe cope with the arrival of thousands of migrants and refugees. All times local (CET):

Britain's treasury chief has said the country's international aid budget will be put to use to help the government settle thousands more Syrian refugees. The number has not yet been set.

George Osborne said Sunday that the money will be earmarked for local authorities to help pay for housing people coming from refugee camps that border Syria.

It follows an earlier announcement from Prime Minister David Cameron that Britain would substantially expand its refugee program.

Osborne said the government is involved in a "fundament re-think" of its aid policy. He said the crisis is now on Britain's doorstep and that part of the 12 billion pound ($23 billion) international aid budget should be put to use to help refugees get started in Britain.

Hungary has permitted migrants to use normal train services to move closer to Western Europe through its porous western border, abandoning visa checks that it previously used to prevent them from easily reaching Austria and Germany on public transportation.

The unexpected move came just a day after Hungary, buckling from the pressure of a buildup of thousands of asylum seekers at Budapest's main railway station and on its major highway, shuttled several thousand people to its border with Austria using a fleet of buses.

Austria and Germany, the migrants' predominant destination, agreed to take the busloads as an exceptional measure but emphasized that Hungary must handle the cases of other asylum seekers on its own soil. Hungary likewise billed the bus convoy as a once-only opportunity for migrants to avoid its own asylum system.

Lech Walesa, Poland's legendary Solidarity leader and former president, says he believes refugees fleeing war and persecution must be helped, and that he would even be willing to welcome some into his own home.

Walesa, who won the Nobel Peace Prize for his activism against communism in the 1980s, said "we have to share our last slice of bread with those in need. We are humans. They are in a tragic situation."

He spoke on Sunday to the private TVN24 broadcaster.

Asked by a television journalist if he would be willing to take refugees into his own home, he said he was but that he would first need to get his wife's agreement.

Poland's government has so far agreed to take 2,000 refugees in a European Union plan.

Germany has warned other European Union members that they must abide by the bloc's rules on processing asylum seekers.

The country's interior ministry says the so-called Dublin rules, which require asylum requests to be processed in the first EU country they arrive in, are still valid.

It says Germany's decision to allow thousands of migrants in Hungary to travel onward to Germany was an exception and "this does not render the Dublin rules inactive."

The ministry cautioned in a statement Sunday that "big willingness to help, which Germany has shown in the last weeks and months, should not be overstretched."

It added that "Only if this is ensured can Germany continue to do its part to tackle the large number of asylum seekers" coming to Europe.

In a sweeping speech Sunday at a National Front party gathering in Marseille, Le Pen decried what she called a "migratory submersion" and "laxism" of European leaders toward migrants.

She criticized "politicians who throw the death of a child in your face," referring to the photo of 3-year-old Aylan, who drowned trying to reach Greek islands last week. The image has drawn greater attention to the plight of Syrians refugees.

The weekend gathering laid out policies before regional elections in December, after Le Pen kicked her father Jean-Marie Le Pen out of the party he founded.

Authorities in Bavaria, Germany's biggest state, say they want other parts of the country to take up responsibility for new migrants after some 7,000 people arrived Saturday.

A spokeswoman for the authorities in Upper Bavaria says some 1,360 people arrived in Munich by Sunday morning and a further 4,000 people are expected during the course of the day.

Simone Hilgers told The Associated Press that "Munich and Bavaria can't manage it alone" and that Bavaria "needs the support pledged by other (German) states."

Hilgers says some 3,300 migrants have already been taken other parts of Germany since Saturday morning.

Iranian President Hassan Rouhani has praised European Union countries helping the refugees streaming into the 28-nation bloc and urged others to step up their efforts.

The remarks, published on Rouhani's website Sunday, came during a meeting with the new Hungarian ambassador in Tehran and were seen as indirect criticism of Budapest's handling of the situation.

After days of chaos, Hungary opened its borders with Austria over the weekend, allowing thousands of refugees and migrants to travel westward.

Iran is a major patron of Syrian President Bashar Assad, whose forces have been responsible for much of the violence that has driven more than 4 million Syrians to flee the country.

Pope Francis is asking faithful throughout Europe to shelter refugees fleeing `'death from war and hunger."

Francis said Sunday that the Vatican's two parishes are taking in two families of refugees. He gave no details as he addressed tens of thousands of people in St. Peter's Square.

Francis said it's not enough to say, `'Have courage, hang in there," to the hundreds of thousands of refugees who are on the march toward what he called `'life's hope."

He called on every Catholic parish, convent, monastery and sanctuary in Europe to shelter a family, and asked bishops throughout Europe to urge their dioceses to do the same.

Israel's prime minister says his country is not indifferent to the plight of migrants and refugees flooding Europe, but that Israel is too vulnerable to absorb them.

Benjamin Netanyahu bemoaned the "human tragedy" of the victims of Syria's civil war and said Israel has aided them in various ways. But he added that Israel is too small a country, both geographically and demographically, to provide a haven for a large influx of migrants.

Israel runs a field hospital on its border with Syria and has taken in wounded Syrians, but has stopped short of opening the borders to its longtime enemy.

Israel's opposition leader Isaac Herzog says the country should take in a limited number of Syrian asylum seekers amid the current refugee crisis in Europe.

Authorities in Cyprus say they have rescued 114 people believed to be refugees fleeing war-torn Syria after their fishing boat issued a distress call some 46 miles (74 kilometers) off the east Mediterranean island nation's southern coast.

Cyprus police said Sunday that all 114 people, including Palestinians from Syria, are in good health. They include 19 women, 30 children, 5 infants and 60 men.

The refugees were transferred to the southern port of Larnaca for health and identity checks.

Police said three men, including a 28-year-old believed to be the boat's captain, have been arrested and are being questioned.

French mayors are offering to house refugees amid increasing concern for Syrians and others fleeing war and seeking haven in Europe.

French Interior Minister Bernard Cazeneuve said in a statement Sunday that several dozen mayors have offered to help in recent days, and convened a national meeting to organize refugee housing on Sept. 12.

France is trying to speed up the process for seeking asylum and to better welcome refugees, as the numbers coming to Europe this year have soared. Many asylum seekers in France have no place to live and sleep in make-shift camps, from Paris to Calais.

A grassroots French group arranging private housing for refugees has also seen a spike in offers in recent days, after the widely viewed photo of a drowned Syrian boy helped raise public awareness.

On the Greek island of Lesbos, police have used batons to beat back a demonstration by some 300 migrants chanting "Athena, Athena" as they tried to come out of the port area. Several of the protesters were injured in the clash, with one taken away unconscious by an ambulance.

The migrants, mostly Syrians, Iraqis and Afghans, say that local authorities on the Aegean island are not processing them quickly enough so they can continue their journey to western Europe. They also complain that authorities on Lesbos are not offering them any help and that they are fast running out of money.

The clashes early Sunday were the third in as many days between migrants and police. The demonstration on Sunday was led by Afghans.

Thousands of migrants and refugees have arrived by train and bus in cities across Germany overnight.

Police say a special train with 570 people on board arrived in the Thuringian town of Saalfeld late Saturday. More than half of them were taken onward to Dresden, where a school for German army officers has been cleared to provide temporary shelter for 350 newcomers.

Trains also took migrants to Hamburg in the north and Dortmund in the west of the country, while buses brought more than 300 people to the capital Berlin.

Thousands more people, mainly Syrians, Iraqis and Afghans fleeing war and persecution, are expected to arrive in Germany and Austria from Hungary on Sunday.

The refugees were allowed to leave Hungary Saturday after the country opened its borders with Austria.