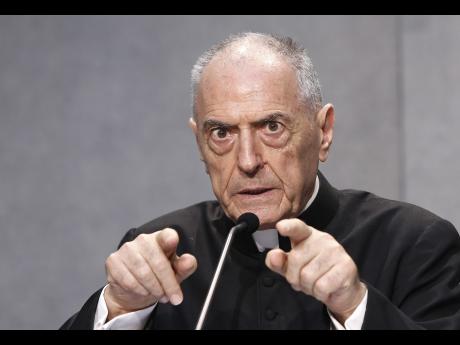 AP
Monsignor Pio Vito Pinto speaks during a press conference to illustrate a new law, issued by Pope Francis, regulating how bishops around the world determine when a fundamental flaw has made a marriage invalid, at the Vatican yesterday.

Pope Francis radically reformed the Catholic Church's process for annulling marriages yesterday, allowing for fast-track decisions and removing automatic appeals in a bid to speed up and simplify the procedure.

Francis issued a new law overhauling three centuries of church practice, placing the onus squarely on bishops around the world to now determine when a fundamental flaw has made a marriage invalid.

Catholics must get a church annulment if they want to remarry in the church. Without it, divorced Catholics who remarry civilly are considered to be adulterers living in sin and are forbidden from receiving Communion, a dilemma at the heart of a debate currently roiling the church that will come to the fore next month at a big meeting of bishops.

The church's annulment process has long been criticised for being complicated, costly and out of reach for many Catholics, especially in poor countries where dioceses don't have marriage tribunals.

"With this fundamental law, Francis has now launched the true start of his reform," said Monsignor Pio Vito Pinto, the head of the Roman Rota, the church's marriage court. "He is putting the poor at the centre, that is the divorced, remarried who have been held at arms' length, and asking for bishops to have a true change of heart."

Reasons for granting annulments vary, including that the couple never intended their marriage to last or that one of the spouses didn't want children.