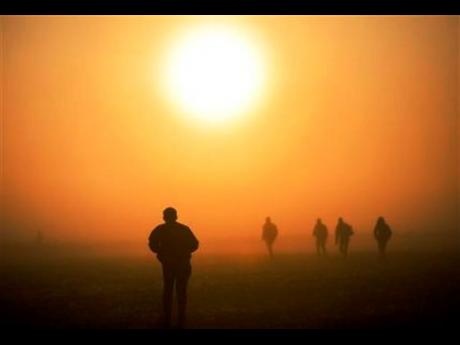 AP photo
Migrants and refugees walk through a field to avoid checkpoints along the railway tracks connecting Horgos and Szeged near Roszke, at the border between Hungary and Serbia, Sunday, Sept. 13.

ATHENS, Greece (AP) -- At least 28 people seeking a better life in Europe drowned Sunday as they attempted a wind-swept sea crossing from Turkey to Greece, while a record number of asylum seekers reached Hungary's border with Serbia just two days before the government vows to make its southern frontier more difficult to cross.

Greece's coast guard said the 28, including four infants and 10 older children, died when their wooden boat containing more than 125 people capsized near Farmakonissi. The island lies midway between Samos and Kos, two of the favoured targets for smugglers sending thousands of migrants and refugees daily to Greek islands off Turkey's coast.

Officials said 68 others were rescued while 30 more swam to the barely populated island. Coast guard officials said the boat may have been toppled in part because of wind gusts exceeding 50 kph (30 mph).

Sunday's tragedy came just a day after two other boats capsized and at least five people - four children and a 20-year-old man - were presumed drowned. The coast guard said they still were searching for those bodies.

In Hungary, army engineers crowned the top of the planned 174-kilometre (109-mile) border fence with razor wire as the government warned that, from Tuesday onward, any asylum seekers caught breaking through the barrier would be arrested and charged with a criminal offence. Police said 4,330 were detected crossing in the previous 24 hours, more than 700 higher than the previous one-day record, as trekkers strove to reach Hungary before the tougher security measures take effect.

This year, more than 175,000 have passed through Hungary from Serbia en route to Western Europe, and the government of Prime Minister Viktor Orban says it's determined to make Hungary a more difficult challenge, with deployments of troops and potential prison terms part of the deterrent. Hungary's lawmakers have not voted yet on whether to back government plans to deploy more than 3,000 troops in support of border police, but dozens of soldiers already were patrolling the fence Sunday.

Some drove along the dirt track beside the fence in jeeps while others patrolled on foot with attack dogs. While many migrants viewed the military presence with suspicion, they were able to walk through a gap in the fence without being challenged. All soldiers appeared to be armed with assault rifles.