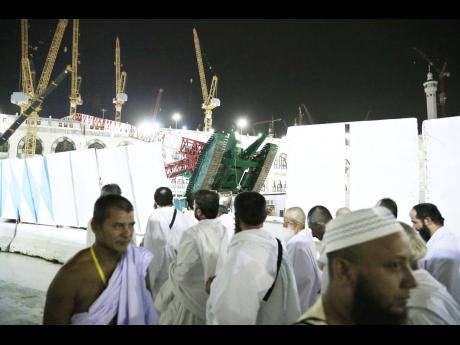 High winds were to blame for the toppling of a massive crane that smashed into Mecca's Grand Mosque and killed at least 107 people ahead of the start of the annual hajj pilgrimage, the head of Saudi Arabia's civil defence directorate said yesterday.

The disaster, during a violent thunderstorm that roared through Islam's holiest city late last Friday afternoon, was the deadliest incident in years surrounding the hajj, which gets under way in full later this month.

Images shared on social media showed a horrifying scene. The crane boom pierced through the roof of the mosque bringing down slabs of reinforced concrete and leaving bodies lying amid pools of blood on the polished mosque floors as frightened survivors screamed in panic.

The director general of civil defence, Suleiman bin Abdullah al-Amro, told satellite broadcaster Al-Arabiya that the unusually powerful winds that toppled the crane also tore down trees and signs as a storm whipped through the area.

He denied reports that lightning brought down the red-and-white crane, which was being used for the mosque's expansion, or that some of those killed died in a stampede.

"The speed of the wind was not normal," he said. "There was no way for people to know that the crane was about to collapse for them to scramble," he added.

An amateur video circulating online, however, appeared to show a frantic scramble in the moments after the crane collapsed as scores of people pushed and jostled one another in a struggle to get out.

At least 238 people were injured in the accident, according to civil defence figures.

Authorities did not provide details on the victims' nationalities, but it was likely that the tragedy will touch several countries.