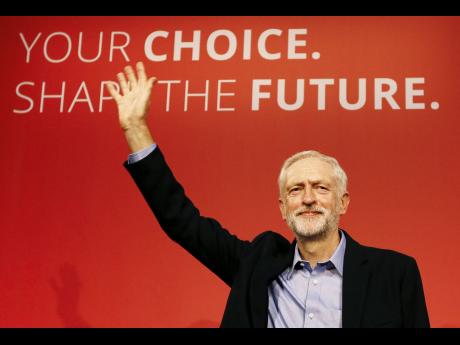 AP
Jeremy Corbyn waves on stage after he was announced as the new leader of the Labour Party during the Labour Party Leadership Conference in London yesterday. Corbyn will now lead Britain’s main opposition party.

Veteran far-left lawmaker Jeremy Corbyn was elected leader of Britain's opposition Labour Party yesterday, a runaway victory that threatens to further divide the party as it struggles to recover from a heavy defeat in elections earlier this year.

Corbyn's win is one of the biggest political shake-ups in British politics in decades, marking a sharp left turn for his party and a rejection of the more centrist policies of his predecessors.

The silver-haired and bearded Corbyn, 66, has drawn vitriol and admiration in equal measure with his old-school socialist views. He wants more taxation for the rich, strongly opposes Britain's austerity measures, and argues for nationalising industry.

Considered an eccentric outsider just three months ago, he has surged in popularity to become the favourite over his three more mainstream rivals.

Cheers and applause erupted in the London conference venue as it was announced that Corbyn swept almost 60 per cent of the vote, far ahead of his closest rival, Andy Burnham, who scored 19 per cent. Some 422,664 votes were cast.

In his speech, Corbyn promised to bring about a more equal and compassionate Britain and end "grotesque levels of inequality".

"The Tories have used the economic crisis of 2008 to impose a terrible burden on the poorest people of this country," he said. "It's not right, it's not necessary, and it's got to change."

Earlier, as he arrived at the conference venue, he was mobbed by dozens of supporters who sang the socialist anthem, The Red Flag.

Corbyn's unexpected success has already stirred months of vigorous, often bitter, debate within the party about its identity.

Under the last two Labour leaders in power, Tony Blair and Gordon Brown, Labour shed its commitment to nationalising industry and wooed big business. But since Labour lost power in 2010 - and suffered even worse losses to Prime Minister David Cameron's Conservatives in this year's election - some activists believe it was time to return to the party's roots.

Corbyn has been a lawmaker for some 30 years, but has never held a government office. He has been a fixture at left-leaning demonstrations for even longer, championing causes from nuclear disarmament to stopping the Iraq war.