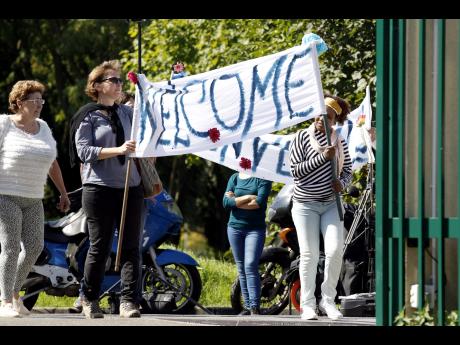 AP
Neighbours hold a banner to cheer a group of migrants arriving after an overnight bus trip from Germany to the north of Paris, France. 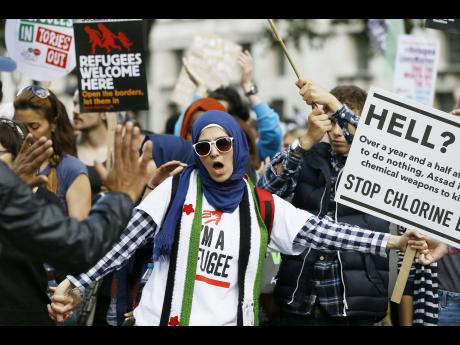 AP
Demonstrators chant and hold banners during a Solidarity with Refugees march from Marble Arch to Parliament in London, yesterday.
1
2

Premier League clubs in England are helping Save the Children raise funds for refugees this weekend, with Arsenal donating one pound (US$1.50) from each ticket sold.

The appeal was promoted at six games yesterday, with matches featuring banners of support and messages on big screens encouraging fans to donate.

Justin Forsyth, chief executive of Save the Children, said that soccer "has an incredible ability to bring people together". He added he was "proud that Arsenal is leading the way in showing that Britain cares".

France has suspended its honorary consul in the Turkish seaside town of Bodrum after it was revealed that her maritime shop sells rubber rafts to migrants.

The move was prompted by a TV report from Bodrum, a jumping-off point for migrants heading by sea to Greece.

France 2 TV used hidden cameras to talk with Francoise Olcay in her store - which has a French flag outside and a plaque naming it as a "consular agency of France".

Olcay said she was aware that migrants are among the customers for such rafts, which are ill-equipped for a sea voyage. She said, however, that stopping sales would "change absolutely nothing".

Migrant children were applauded by 75,000 soccer fans as they accompanied Bayern Munich players onto the field in Munich yesterday.

The tribute took place before a Bundesliga game with Augsburg.

The players held hands with a migrant child on one side and a German child on the other for what the club says was "a symbol for the integration of refugees".

Some of the kids waved shyly to the crowd while others simply soaked it all in - the culmination of long treks across Europe that were fraught with danger, hunger, and fear.

Bayern, like many German clubs, has offered support to people fleeing war and poverty. The club is donating €1 million (US$1.1 million) to refugee projects and arranging a training camp to give youths German lessons, meals, and soccer equipment.

Up to 30,000 people gathered outside the Danish parliament in Copenhagen yesterday and chanted in English: "Say it loud and say it clear; refugees are welcome here!"

The rally was part of a European-wide movement to welcome the tens of thousands fleeing violence in their home countries.

Moroccan-born Mohammed Harra told Denmark's Politiken newspaper: "I am here to support refugees who have been driven out of their houses because of what has happened in Syria with the bombings and the killings."

Europe, this summer, is facing an enormous wave of people, many from Syria, who are fleeing violence in their home nations.

The Hungarian camerawoman caught on video kicking and tripping migrants running from police has issued a new apology after her initial one was criticised for not being remorseful enough.

Petra Laszlo said yesterday in a message on the website of the Magyar Nemzet newspaper that she found it hard to express her exact feelings because her life was now "crumbling into ruins".

Using all capital letters, Laszlo, 40, then said: "I SINCERELY APOLOGIZE FOR WHAT HAPPENED TO THOSE AFFECTED."

Hungarian media say she and her family have now gone into hiding. Laszlo was dismissed last Tuesday by N1TV, an Internet-based channel closely associated with Hungary's far-right Jobbik party, hours after her actions.

The channel's website has been down since last Thursday after being disabled by 'Fallaga Team', an Islamist hacker group from Tunisia.

Some 600 French mayors and many humanitarian groups gathered in Paris yesterday to address the question of migrant housing.

The session with Interior Minister Bernard Cazeneuve aimed to lay the groundwork for France to take in 24,000 refugees over the next two years.

Even before the refugee crisis, France had a housing crisis for asylum seekers, with some left to fend for themselves on the streets.

Mayors attended of their own volition. Some have already said they want only Christian refugees - a notion officially frowned on. The only major French party not at the session was the far-right National Front, which is fundamentally opposed to France taking in more refugees.

It appears that a few asylum seekers want to stay in Denmark.

Danish police say 225 people crossed the border from Germany into Denmark between Friday and yesterday, and only three applied for asylum in Denmark. The rest headed north, likely to Sweden, Norway or Finland.

The head of Sweden's immigration agency says the photograph of the young Syrian boy who drowned on a beach in Turkey while trying to get to Europe "has had an impact and changed the image" of migrants.

The agency, Migrationsverket, expects that 90,000 people will seek shelter in Sweden this year, a country of 10 million that took in more than 80,000 asylum seekers last year.

Agency chief Anders Danielsson told Sweden's Aftonbladet newspaper that "there is a crisis, but not for us. It is a crisis for those fleeing".

The Scandinavian country ranks among the top-five European Union countries where refugees go, and is second, after Germany, for asylum applications this year.

Merkel noted in her weekly video message yesterday that women arriving in Europe "have often experienced terrible things and are also traumatised".

She said that beyond attempts to deal with that, "I can only advise women to learn the language". She said they should consider learning with their children, who may speak better German as a result of going to school - "(but) they shouldn't be scared off by that".

Merkel also advised women "simply to seek contacts - not to curl up and just live and work in the community they know, but try to get out, too".

Why now? Why so many?

Migrants have for years taken death-defying trips across the Mediterranean to reach Europe, but the flow has hit record proportions this year - notably with an influx of Syrians, Afghans, and Eritreans fleeing war, repression or poverty back home.

The push has, by some accounts, already topped 432,000 people this year. While some are economic migrants, most are Syrians fleeing carnage at home.

Travelling mostly into Greece by way of the Aegean Sea from Turkey, more than 175,000 have flooded into Europe this year - already more than twice the number in all of last year, the International Organisation for Migration said.

A variety of factors, including a spike in fighting and sagging international aid, are fuelling the surge.

People fleeing war zones make up the majority of migrants passing through Greece. Tens of thousands are also pouring into Italy - with a mishmash of nationalities led by Eritreans, Nigerians, Somalis, Sudanese, and Syrians, according to the International Organisation for Migration.

While the main Mediterranean migrant flows of recent years have been from North Africa to Italy and Spain, the recent surge has occurred between the Turkish coast and nearby Greek islands that have been badly underprepared for the influx.

From there, the migrants have travelled via mainland Greece, Macedonia, Serbia, Hungary, and Austria - what is known as the Western Balkans route.