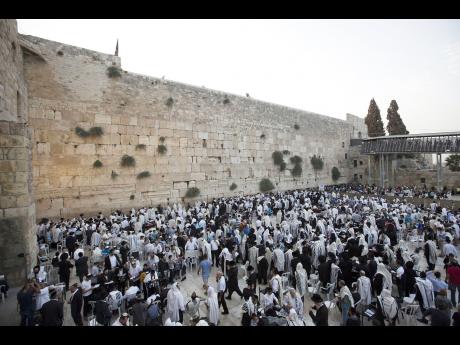 Police spokesman Micky Rosenfeld said forces moved into the Al-Aqsa Mosque compound at around 7 a.m. yesterday after police received reports that protesters were planning to disrupt visits to the area by Jewish worshippers and tourists.

He said the protesters barricaded themselves inside the mosque and threw rocks and firecrackers at police. He said police did not enter the mosque, but removed barricades around the building. Suspected pipe bombs were found at the entrance to the mosque, police spokeswoman Luba Samri said.

Police released video showing lit firecrackers and other objects thrown by Palestinians inside the mosque at the officers on the outside with some firecrackers exploding within the holy site. There were no reports of arrests or injuries. The site was closed for three hours during the stand-off but then reopened for visitors.

Local video footage shows a Jewish man wearing a traditional prayer shawl attacked as he passed through an alleyway close by in the old city. It shows attackers throwing water bottles at him and then tripping him up and kicking him. Police said Muslim women protesting nearby had thrown objects at him and then "passing Arabs" beat him.

The hilltop compound is revered by Jews as the Temple Mount, site of the two biblical Jewish temples. Muslims call the site the Noble Sanctuary and revere it as the spot where they believe their Prophet Muhammad ascended to heaven.

The site is a frequent flashpoint of violence. Since Israel captured east Jerusalem from Jordan in 1967, Jewish worshippers have been allowed to visit - but not pray - at the site. The area is administered by Muslim authorities and is under Jordanian custody. Muslim authorities view the presence of Jewish worshippers and Israeli police as a provocation and accuse Jewish extremists of plotting to take over the site.