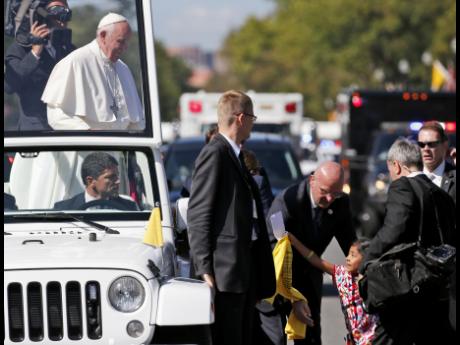 AP
Sophie Cruz, 5, of suburban Los Angeles, reaches to give Pope Francis a letter and T-shirt during a parade in Washington on Wednesday. 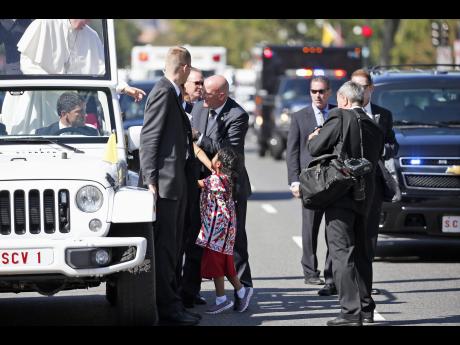 AP
Pope Francis reaches for a letter and T-shirt from Sophie Cruz, 5, of suburban Los Angeles, during a parade in Washington on Wednesday.
1
2

Five-year-old Sophie Cruz made her way through a security fence and was just feet from Pope Francis' Popemobile during a short parade around the White House when she hesitated.

Clutching a yellow T-shirt and a note about immigration, she was someplace she was not supposed to be. The uniformed security officer and another in a suit coming towards her probably seemed intimidating. It was not until Francis himself motioned to her that she relented and let a security agent carry her to side of the open-air Jeep.

Standing in the Popemobile, the Pope did what this Pope so often does: He gave her a hug and kiss. And Cruz made sure she stuck around long enough to give the Pope the shirt and her message.

The scene, broadcast live on cable television outlets and captured by multiple photographers, is something of a routine for Francis, well known for freely wading into crowds, kissing and blessing hoisted children and eagerly accepting gifts from well-wishing strangers.

But for the start of his trip in the United States, where he is being surrounded by a phalanx of security trying to keep most onlookers at a distance, it also quickly revealed the balance security officials are trying to strike to keep the pontiff safe while letting Francis be Francis.