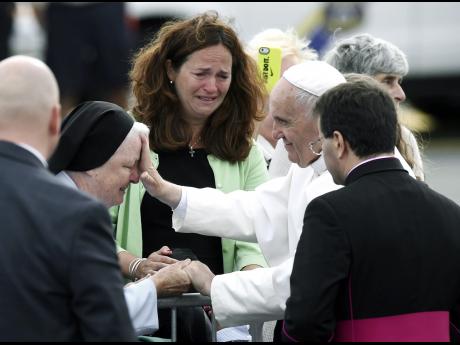 Pope Francis arrived in the City of Brotherly Love yesterday for the final leg of his United States visit - a festive weekend devoted to celebrating Catholic families - and immediately called for the Church to place greater value on women.

The pontiff's plane touched down at the Philadelphia airport after take-off from New York, taking him to a city of blocked-off streets, sidewalks lined with portable potties, and checkpoints manned by police, National Guardsmen and border agents.

After speeches to Congress and the United Nations last week aimed at spurring world leaders toward bold action on immigration and the environment, he focused more heavily on ordinary Catholics during his two days in Philadelphia.

Francis rode by motorcade to the downtown Cathedral Basilica of Sts Peter and Paul and celebrated a Mass for about 1,600 people.

In his homily, he said the future of the Catholic Church in the US requires a much more active role for lay Catholics, especially women.

"It means valuing the immense contribution which women, lay and religious, have made and continue to make to the life of our communities," he said.

Francis has repeatedly said women should have a greater role in church leadership, though he has rejected the idea of ordaining women.

His praise of nuns marked his second such public expression of gratitude in the US after the Vatican, under his leadership, ended a crackdown on the main umbrella group of American sisters. Nuns in the cathedral appreciated the gesture.

"We have felt very strong support from him," said Sister Catherine Darcy of Merion, Pennsylvania, one of about 50 members of the Sisters of Mercy of the Americas at the Mass. "We feel he recognises the contribution that religious (women) make to the Church throughout the world."

At the airport, a Catholic high school band played the theme song from the Philadelphia-set movie Rocky upon Francis' arrival, and among those greeting him was Richard Bowes, a former Philadelphia police officer wounded in the line of duty. Francis also kissed the forehead of a 10-year-old boy severely disabled with cerebral palsy.