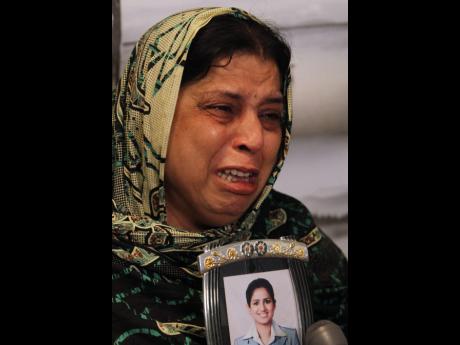 AP
Pakistani mother, Sarwari Begum, shows a picture of her daughter, Bushra Khalique, 27, who is reportedly missing after a crush during the Hajj pilgrimage in Saudi Arabia, last Thursday.

Iran yesterday vowed to take international legal action against Saudi Arabia's rulers over the crush of Muslim pilgrims at this year's hajj, which killed at least 769 people, including 136 Iranians.

The pilgrims suffocated or were trampled to death last Thursday when two massive crowds converged on a narrow street, in the worst disaster to occur during the annual pilgrimage in a quarter-century.

Shiite Iran has accused its Sunni arch-rival, Saudi Arabia, of mismanaging the pilgrimage, which annually draws some two million people from 180 countries.

Iranians comprise the largest group of casualties identified so far. Iranian state TV says Ghazanfar Roknabadi, a former ambassador to Lebanon, as well as two Iranian state TV reporters and a prominent political analyst are among those still missing.

He said Saudi authorities blocked a road used by hajj pilgrims to allow a royal convoy to pass through, causing the deadly convergence in the town of Mina on the outskirts of Mecca.

"They have to know that we will pursue the trial of Al-Saud for the crime they have committed against the hajj pilgrims through international courts and organisations."