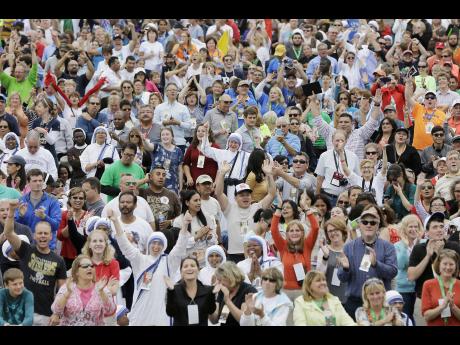 AP
People gathered on the Benjamin Franklin Parkway cheer after a tent blocking their view of Pope Francis before his mass was removed. 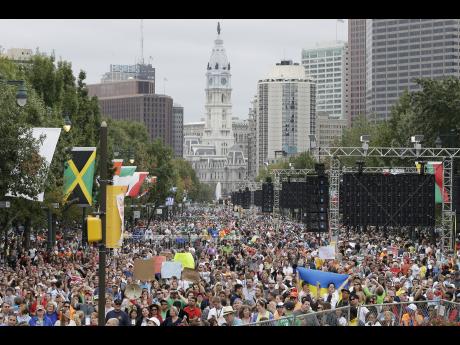 AP
People gathered on the Benjamin Franklin Parkway chant and hold up signs to protest a tent that was erected, blocking their view of Pope Francis before his Mass, Sunday in Philadelphia. The tent was removed.
1
2

Pope Francis met with victims of child sexual abuse Sunday on the final day of his United States (US) visit and promised to hold accountable those responsible for the scandal in the church, delivering a powerful warning to American bishops accused of covering up for pedophile priests instead of reporting them to police.

In a gesture of reconciliation just hours before he was to return to Rome, the Pope told the victims he is "deeply sorry" for the times they came forward to report the abuse and weren't believed. He assured them that he believes them.

"I pledge to you that we will follow the path of truth wherever it may lead," Francis said in Spanish. "Clergy and bishops will be held accountable when they abuse or fail to protect children."

Then, he went into a meeting with American bishops in town for a Catholic festival on the family and told them the same thing face-to-face.

"God weeps" over what was done to the youngsters, he said.

The gesture came as tens of thousands of the faithful streamed into the heavily fortified City of Brotherly Love for the last and potentially biggest event of the pope's joyful six-day US visit: a Mass on Philadelphia's grandest boulevard, the Benjamin Franklin Parkway.

Organisers predicted a crowd of one million, though there were fears that the unprecedented security, including airport-style bag searches, crowd-control cattle chutes and blocked-off streets, had scared many people away and would depress the turnout.

Francis' journey also took him to Washington and New York. Along the way, the 78-year-old pontiff drew large and adoring crowds, met with President Barack Obama, visited ground zero and addressed Congress and the United Nations, calling for urgent action on climate change and poverty.

The meeting on Sunday with victims of sexual abuse was the second Francis has held. He received some at the Vatican in July 2014.

But in an apparent effort by the church to reshape the discussion, the Vatican said not all five of the victims on Sunday were abused by members of the clergy; some of the three women and two men had been victimised by relatives or educators.

The main victims' support group, SNAP, dismissed it as an exercise in public relations.

"Is a child anywhere on earth safer now that a pope, for maybe the seventh or eighth time or ninth time, has briefly chatted with abuse victims? No," said SNAP's David Clohessy.