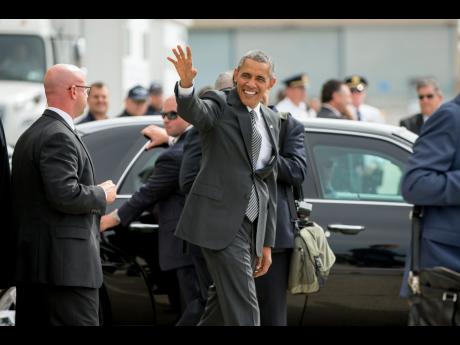 AP
President Barack Obama waves to guests at JFK International Airport, New York yesterday before boarding Marine One for a short trip to the Wall Street Helicopter Pad in Manhattan.

Fresh from successes on Iran and with the Pope, President Barack Obama still carried heavy burdens into critical meetings this week at the United Nations General Assembly.

They include the threat from Islamic State militants in Iraq and Syria, as well as the Syrian civil war and the ensuing refugee crisis, and Russia's moves in Ukraine and Syria.

Obama arrived late yesterday morning for three days in New York, and perhaps the most anticipated moment was to come Monday evening - a meeting with Russian President Vladimir Putin on the sidelines of the annual gathering of world leaders.

It will be their first face-to-face meeting in nearly a year. Both leaders also were to address the opening of the assembly's annual ministerial meeting today.

The United States (US) and Russia have quibbled over who requested the meeting and what the focus will be. Putin wants to talk about Syria; Obama wants to concentrate on Ukraine.

Despite administration efforts to turn Putin into an international pariah after Russia annexed the Crimean Peninsula from Ukraine in March 2014, Obama believes not engaging with the Russian leader "would be wrong" given the pressing issues in Ukraine and Syria, Obama deputy national security adviser Ben Rhodes said.

Putin has begun a military build-up in ally Syria for reasons that US officials have said remain unclear.

In preparation for Obama's meeting with Putin, Secretary of State John Kerry and Russian Foreign Minister Sergei Lavrov yesterday discussed Russia's military involvement in Syria, including the possibility of a political transition in the war-torn country, according to a senior US official. Kerry and Lavrov also talked about Ukraine.

The White House also announced that Obama would meet with Cuban President Raul Castro tomorrow. It will be their second meeting since the US and Cuba restored diplomatic ties late last year, and will follow Pope Francis' visit to both countries.