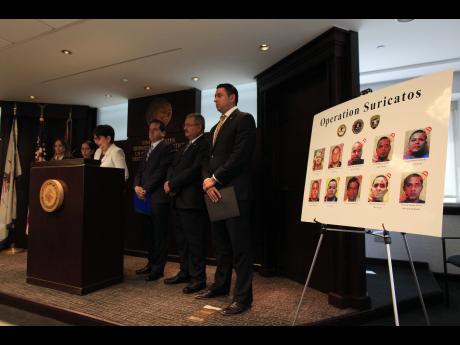 AP
US Justice and FBI officials stands by a poster with photos of the 10 police officers arrested during news conference about charges filed against the Puerto Rican police officers at the United States Attorney's Office in San Juan, Puerto Rico, yesterday.

Already undergoing federally mandated reform, Puerto Rico's police department faces an overhaul after a new wave of arrests in an agency widely accused of corruption and other abuses.

The restructuring was announced after FBI agents arrested 10 police officers yesterday for allegedly stealing drugs and cash, planting evidence and taking bribes. A lieutenant and sergeant were among those detained in the latest round of arrests targeting the US territory's troubled police department.

Police Chief JosÈ Caldero said that, among other things, he would reorganise anti-drug units and require polygraph tests for officers.

"We will clean house," he said. "We will not tolerate corruption."

Authorities already had said they have hired consultants, trained officers on the use of force and appointed a monitor as part of a 10-year reform effort ordered by Washington after the US government issued a scathing report in 2011 accusing police of illegal killings, corruption and civil rights violations.

Critics questioned whether the department can root out the problems on its own as the FBI warned that more arrests were likely.

"The police departm ent obviously is not capable of cleaning its own house because it's the FBI making the arrests," said William Ramirez, executive director of the American Civil Liberties Union in Puerto Rico. "We're putting out fires all the time. We get a lot of complaints."

Puerto Rico's police department is the second largest in a US jurisdiction, and more than 100 officers have been arrested over the past five years on corruption charges. Lawyers and activists said many more were never prosecuted.

The corruption has frustrated many Puerto Ricans, leading some like Xiomara Rivera to videotape suspected cases of police abuse only to end up in trouble with authorities.

The pregnant mother of two young children used her cellphone in August to record an exchange between police officers and her neighbour, a retired officer himself, who denounced the other officers for allegedly using a Taser on a young man, she said.

After police arrested the retired officer following a verbal fight, Rivera said, they surrounded her, drew their Taser and snatched her phone.