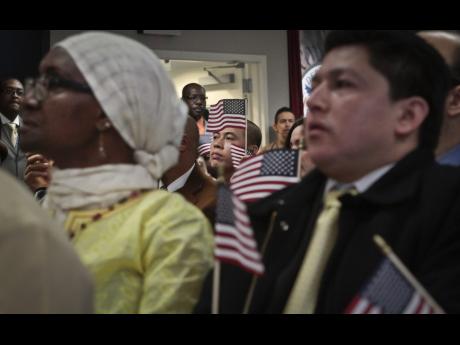 AP
In this December 18, 2013 file photo, immigrants hold miniature US flags as they listen to a video broadcast from President Barack Obama during a naturalization ceremony attended by Mayor Michael Bloomberg in New York.

A sudden about-face by the State Department has left tens of thousands of highly skilled immigrants unable to apply to become legal permanent residents as they had expected to yesterday, even though many have already paid expensive legal and medical fees to get their applications ready, according to a new lawsuit.

The affected immigrants are mostly from India and China, and many have advanced degrees and work at top tech companies or in medical firms.

They said they have spent thousands of dollars apiece, lawyers estimate that the total is in the tens of millions, and that the government has also jerked them around emotionally, forcing them to cancel trips, miss weddings and funerals, and take time off work, all for nothing.

The State Department issued a bulletin on September 9 detailing which categories of people in the US could file their final green card paperwork yesterday. The move came in response to an executive order last year from President Barack Obama seeking to improve and simplify the nation's immigration system.

The bulletin thrilled many of the workers who are here on petitions for employment visas as it was expected to help clear up a yearslong backlog of applications by immigrants from China and India. Many immediately started preparing to file by getting their paperwork in order, paying lawyers and obtaining required medical exams and vaccinations.

But on September 25, the government revised that notice without explanation, severely curtailing who could apply by issuing new and earlier cut-off dates for consideration based on when an application for a green card was filed. The State Department issued no word as to when those left out might be allowed to file.