Russia says Islamic State group not the only target in Syria 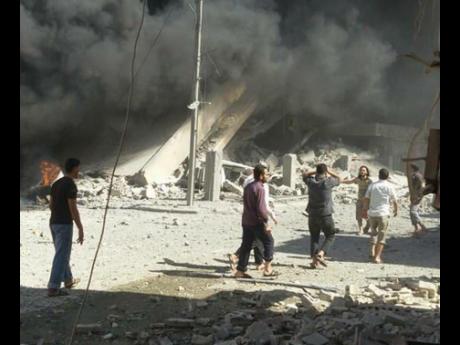 AP
A volunteer search-and-rescue group shows the aftermath of an airstrike in Talbiseh, Syria.

Russian jets carried out a second day of airstrikes in Syria yesterday, but there were conflicting claims about whether they were targeting Islamic State and al-Qaeda militants or trying to shore up the defences of President Bashar Assad.

As concerns grew about a conflict that has now drawn in warplanes from the world's two most powerful militaries, Russian President Vladimir Putin denied reports that civilians were killed in any Russian airstrikes.

"We are ready for such information attacks," he said in a live broadcast from the Kremlin. "The first reports of civilian casualties came even before our jets took off."

Russian Foreign Minister Sergey Lavrov said his country and the US-coalition "see eye-to-eye" on the targets of the fight in Syria and that the first military contact between Russia and the US would take place "very, very soon". He added that "we believe that our position is absolutely in line with international law".

Russian jets appeared to be primarily bombing central and northwestern Syria, strategic regions that are the gateway to Assad's strongholds in the capital Damascus and the coast. The United States and allies fear that Russia, which has backed the Assad family since the current leader's father was in power, is using the air campaign as a pretext to go after anti-Assad rebels that include CIA-backed groups.

US Senator John McCain said yesterday that some Russian airstrikes in Syria were aimed at CIA-backed groups fighting the Assad regime, echoing claims from activists.