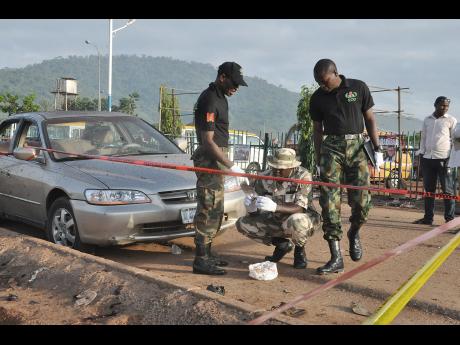 AP
Soldiers gather at the site of a bomb explosion in Abuja, Nigeria, yesterday.

No group has claimed responsibility but the attacks are similar to others by Boko Haram, Nigeria's home-grown Islamic extremist group.

Boko Haram has largely been carrying out attacks in the country's northeast but has been extending its range to other cities.

Violence from Boko Haram's six-year insurgency has killed nearly 20,000 people and displaced 1.4 million from their homes.

At least 1,000 people have been killed since President Muhammadu Buhari took office earlier this year with the promise of wiping out the insurgents.

Yesterday President Buhari condemned the attacks. "It is clear this battle is not ideological. It is between the forces of peace and order and the evil forces of murder and destruction," he said.