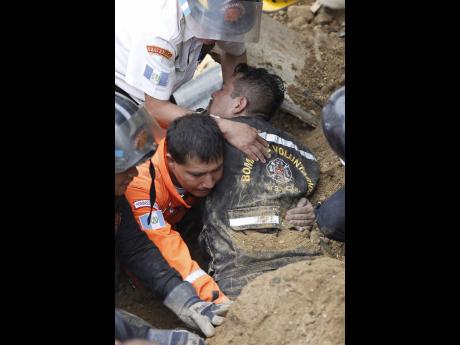 AP
A fireman is rescued after he was trapped while searching for survivors at the site of a landslide in Cambray, Guatemala.

Hundreds of rescue workers using shovels and pickaxes recovered four more bodies early yesterday in the wake of a hillside collapse above a group of homes on the outskirts of the Guatemalan capital.

The death toll rose to 30 amid fears that hundreds more could still be buried in the rubble.

Rescue specialists from the Red Cross and fire and police departments used dogs to search for any possible survivors in the mudslide zone, where tons of earth fell over some 125 homes.

Family members have reported at least 100 people missing after the last Thursday evening mudslide. The number of missing could be as high as 600 based on at least 100 homes in the area.

At least 36 other people have been reported injured.

At the search site, the workers laboured without rest yesterday, halting only when a long whistle sounded, testing if anyone was still alive under the mud and debris.

"We're from the rescue unit," one worker announced. "If there is someone there, please make some noise or yell."

When no response was heard, two more long whistles sounded, a sign that the workers should continue digging.