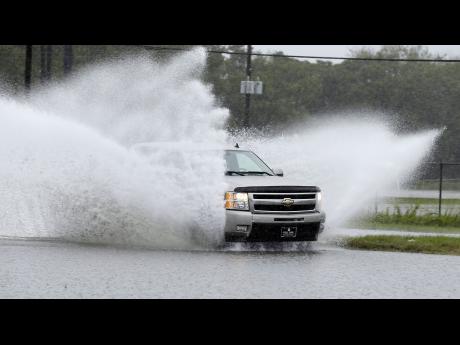 AP
A truck plows through a flooded street in Florence, South Carolina yesterday as rain continues to fall causing flooding in some areas of the state. A dangerous rainstorm drenching the East Coast brought more misery Sunday to South Carolina, cutting power to thousands, forcing hundreds of water rescues and closing "too many roads to name" because of floodwaters. (AP Photo/Gerry Broome)

Flash flooding intensified in some areas of the East yesterday as days of torrential rain and high winds blamed for at least five deaths, left motorists and residents stranded and forced evacuations and rescues in battered South Carolina.

The National Weather Service cited a "historic" rainfall in South Carolina, blamed on a lingering low pressure system in the region and the outer edges of Hurricane Joaquin. The Category 2 storm with sustained top winds of 110 miles per hour avoiding a direct hit, but did fuel rains and high wind along the coast.

The weather service's Charleston office reported, "mind-boggling rain amounts." Shortly after 9 a.m, they included 24-plus inches in Boone Hall and 18-plus inches near Kiawah.

South Carolina emergency officials reported more than 200 "swift water" rescues since Saturday night. Columbia police said they had 200 calls backed up as they scrambled to answer calls, struggling themselves on the bloated roads.

"Do not attempt to travel across the state today," the state Emergency Management Division tweeted. "Stay where you are unless told to leave by safety officials."

The weather service warned that much of Georgia and South Carolina were saturated by rains that have blasted the area since Thursday. Power was knocked out to about 50,000 residences and businesses in the two states as of early yesterday.

"Major to localised catastrophic flash flooding along with possible landslides and mudslides in the higher elevations of South Carolina and Georgia remain an ongoing concern," the weather service warned.

President Obama approved federal disaster aid for the state. State emergency management officials counseled residents to "remain where you are if you are safely able to do so.

Delay with the drains - NWA moving slowly in its effort to prevent Marcus Garvey Drive flooding from reoccurring
May Pen's poor drainage system takes centrestage
Oh No! Not again! - Clarendon residents facing severe losses from flood waters for the second time in less than a month
‘Blame us’ - Phillips accepts that government’s failure to enforce the rules over the years was major contributor to recent flooding
Rain batters Portland - Landslides leave families homeless