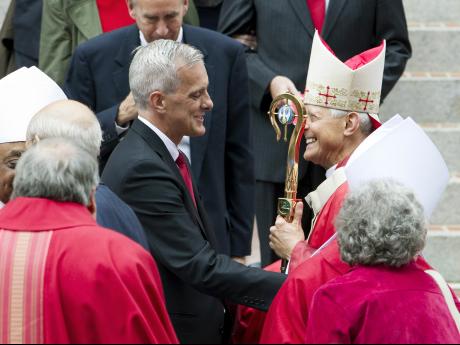 An American cardinal yesterday issued a plea for the rights of the unborn at a church service that included Vice President Biden, six members of the Supreme Court and hundreds of members of the legal community.

Five of the six Roman Catholics on the high court - Chief Justice John Roberts and Justices Sonia Sotomayor, Antonin Scalia, Anthony Kennedy and Samuel Alito - heard the homily by Cardinal Daniel DiNardo; the sixth, Justice Clarence Thomas, did not attend. Justice Stephen Breyer, who is Jewish, was there as well.

Speaking at the annual Red Mass, the day before the opening of the Supreme Court term, DiNardo said that people represented by lawyers are, "more than clients. ... In some cases the clients are voiceless for they lack influence; in others they are literally voiceless, not yet with tongues and even without names, and require our most careful attention and radical support."

As DiNardo spoke, protesters opposed to abortion demonstrated in front of the church.

DiNardo did not elaborate on the rights of the unborn, focusing instead on how the complexity of the law can have a dehumanising effect on those who practice it.

Increasing specialisation within the law is "dizzying" and such formal knowledge "frequently becomes semi-mechanical, even distancing," DiNardo said at the Cathedral of St Matthew the Apostle. "The law and lawyers are around because justice among human beings will always be an issue."

"Even sophisticated knowledgeable human lawyers need reminding, need a divine fire ... both in their personal lives and in their profession itself."

The Red Mass has been held since 1953 at the cathedral by the John Carroll Society, a group of Washington professionals who are Catholic.