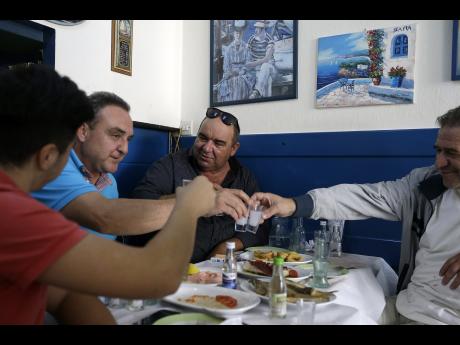 AP
In this photo taken on Monday, customers at a tavern clink glasses filled with tsipouro in Tirnavos, central Greece.

At Statiris Tavern, the patrons' faces are hardened from a life of hard work, truck drivers, builders, and farmers who have just ended their grueling grape harvest.

There's little talk of difficulties at work or the country's financial crisis. This is a place where friends wander in to share a joke or snack on a plate of fries and octopus with a late-afternoon glass of tsipouro, the potent local spirit.

A close relative of the Greek, spirit ouzo, tsipouro has become increasingly popular during the recession as an affordable alternative to imported drinks, but is now facing a tax increase under European Union (EU) rules that could almost double its price.

Coming on top of a raft of other tax increases, the government is planning to pay off debts. The news is a disaster for Tirnavos, a farming town in central Greece famous for its production of tsipouro (pronounced TSEE-poo-roh).

"If I charge four euros for a small bottle of tsipouro and suddenly raise the price to six euros, customers will cut back immediately. They have no spare money in their pocket," says Giorgos Tsitsiroulis, who runs the tavern in this town of 20,000 people, where many store signs are still hand-painted.

"It will affect the entire area because it's a product that's entirely local. The grapes are from this area, the wood to fire the stills is local, the labels on the bottle are local, everything."

Similar to Italian grappa or Turkish raki, tsipouro is a clear and powerful spirit that is produced from twice-distilled grape residue. It is made with and without anise flavoring, the addition making the drink turn cloudy when water is added.

The EU has given Greece two months to double taxes on tsipouro, arguing that it does not have the right to keep a reduced duty that is reserved for some traditionally made products.