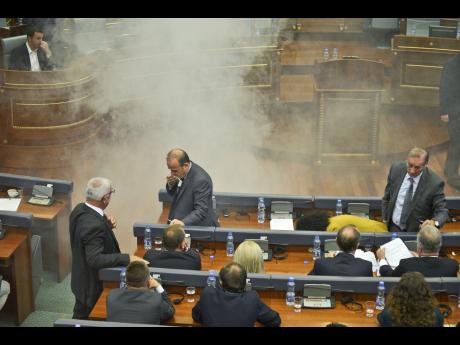 A statement from the government deplored "the violence of a group of the opposition ... from which some lawmakers were injured and asked for medical assistance." There were no reports of serious injuries.

"Conceptual and political disagreements should be debated with the power of argument and parliamentary culture," she said in a statement.

Parliament Speaker Kadri Veseli continued the session, inviting the opposition to take part in the debate on the deals with Serbia to "together express our reservations, or displeasure, or support for the Brussels agreement."

"What is happening is not patriotism and it is not helping Kosovo," he said.

Opposition lawmaker Glauk Konjufca of the Vetevendosje (Self-Determination) Party said the protests at the weekly sessions yesterday will continue. This was the third straight disturbance.