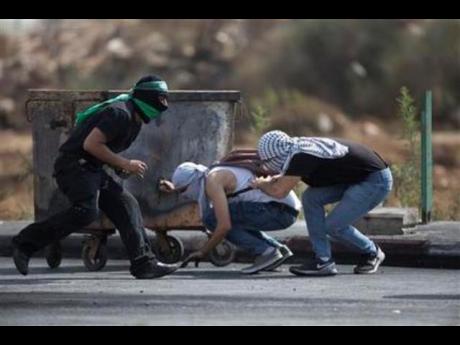 JERUSALEM (AP) -- An Israeli airstrike killed a pregnant Palestinian woman and her 2-year-old daughter in Gaza Sunday, a Gaza health official said, while in the West Bank, police said a Palestinian woman detonated an explosive in her car at a checkpoint, injuring an Israeli soldier and herself.

The attack appeared to mark the first use of explosives in the current round of violence following a series of stabbing and shooting attacks. The violence has unnerved a jittery Israel, and prompted the United States on Saturday to issue a fresh call for restraint by all sides.

The wave of attacks began weeks ago in Jerusalem and has since spread across Israel, while violent protests have erupted in the West Bank and along the Gaza border - where nine Palestinians, including two children, were killed in clashes over the weekend. The Gaza border has been largely calm since the 50-day summer 2014 war between Israel and the Islamic militant group Hamas, which rules the coastal territory.

In response to renewed rocket fire toward Israel, the military said it carried out airstrikes in Gaza targeting Hamas weapons manufacturing facilities. Ashraf Al-Kidra, a Health Ministry spokesman in Gaza, said a nearby home in southern Gaza was struck, killing 30-year-old Noor Hassan and her young daughter. He said four others were wounded, included Hassan's husband and son.

Meanwhile, in the West Bank, Israeli police said a 31-year-old Palestinian woman set off an explosive in her vehicle that lightly wounded a police officer and critically injured herself. Police spokesman Micky Rosenfeld said the police officer noticed the woman driving suspiciously and motioned her to stop. She then chanted "God is great" before the blast.

On Saturday, Palestinians carried out two stabbing attacks in Jerusalem before being shot dead by police, while two Palestinian youths, ages 13 and 11, were killed near the Gaza border fence, as a weeklong bout of violence showed no signs of slowing.

Addressing his Cabinet Sunday, Israeli Prime Minister Benjamin Netanyahu said the country was battling a "wave of terror" fuelled by "systematic, untrue incitement" by the Palestinian Authority in the West Bank and the Islamic Movement in Israel. He said he would be holding consultations to discuss sanctions against the Islamic Movement, which runs education and religious services for Arab citizens of Israel.

Netanyahu says that along with Hamas and the Palestinian Authority, the Islamic Movement was responsible for spreading lies about Israel's supposed intentions regarding a sensitive Jerusalem holy site that is sacred to both Muslims and Jews.

Netanyahu also singled out an Arab lawmaker, Hanin Zoabi, who the premier said called on hundreds of thousands of worshippers to ascend to the site to prevent an "Israeli plot of bloodletting of east Jerusalem residents."

Netanyahu says that amounts to clear incitement to violence and has asked the attorney general to open a criminal investigation against Zoabi.

Recent days have seen a series of attacks by young Palestinians wielding household items like kitchen knives, screwdrivers and even a vegetable peeler. The youths had no known links to armed groups and have seemingly targeted Israeli soldiers and civilians at random, complicating efforts to predict or prevent the attacks.

The violence, including an apparent revenge attack in which an Israeli stabbed and wounded four Arabs on Friday, has raised fears of a new Palestinian intifada, or uprising. There have also been multiple protests inside Israel from the country's own Arab minority, with masked demonstrators clashing with police forces.

At the start of the month, Palestinians shot two Israeli settlers to death in front of their children in the West Bank. In a separate incident, a Palestinian wielding a knife killed two Israeli men and wounded a mother and toddler in Jerusalem before being shot dead. An Israeli motorist was previously killed when his car was pelted with stones on the eve of the Jewish New Year.