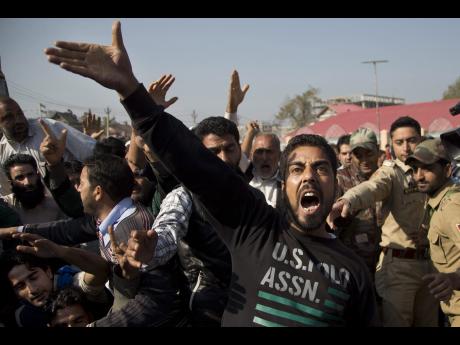 The legislator was full of outrage when he arrived in the north Indian village days after the killing of a Muslim farmer who was rumored to have slaughtered cows.

A Hindu mob had smashed through the heavy wooden door to the man's home, then beat him to death with his wife's sewing machine.

The legislator's anger, though, was not about the killing. Instead, Sangeet Som was furious that men had been arrested in the attack in the village, just 30 miles from New Delhi. Som, a member of India's ruling Bharatiya Janata Party (BJP), called the arrests "atrocities on innocent villagers".

As for the family of the dead man, he dismissed them as "those cow killers".

A few days later, a half-dozen BJP politicians slapped around a legislator on the floor of a state legislature, angry that he had served beef at a party.

In south India, six members of a leftist student political party were suspended after their attempt to serve beef curry on campus to protest the farmer's killing set off a melee.

On Friday, violence swept another northern village amid rumours that a cow had been slaughtered, with a crowd, who had chased down two Muslim men they suspected of cow-killing, clashing with police and burning several cars. Some villagers and police were injured, but no major injuries were reported.

Cows have long been sacred to Hindus, worshipped as a mother figure and associated since ancient times with the god Krishna. But increasingly, cows are also political.

They have become a tool of political parties, an electioneering code word and a rallying cry for both Hindu nationalists and their opponents.

"We should decide if Hindus want to fight Muslims or poverty. Muslims must decide if they want to fight Hindus or poverty," Modi said at a campaign rally in Bihar state, where elections start next week. "It is unity, communal harmony, brotherhood and peace that will take the nation forward."