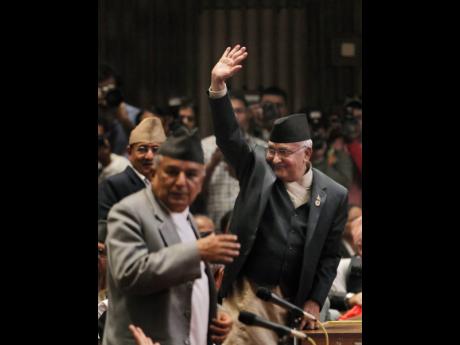 Nepal's new prime minister took the oath of office yesterday and appointed the leaders of groups that are protesting the new constitution as his deputies.

Prime Minister Khadga Prasad Oli appointed Bijaya Gachchedar, who leads one of the Madhesi ethnic groups, and Kamal Thapa, whose party is that demanding Nepal be restored as a Hindu state, as his deputy prime ministers, in his attempt to resolve the crisis in this Himalayan nation.

Soon after taking the oath, Gachchedar told reporters that he joined the government to help resolve the protests in southern Nepal.

"The issues, differences and demands of the Madhesi and other groups will be resolved by adjusting the states through amendments in the constitution," Gachchedar said that adding the government would get the support of all political parties to make the changes.

Oli was sworn in by President Ram Baran Yadav a day after he was elected in parliament with support from smaller parties.