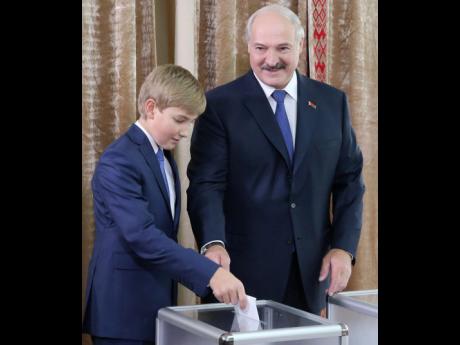 AP
Belarusian President Alexander Lukashenko with his youngest son, Nikolai, casts his ballot at a polling station during the presidential election in Minsk, Belarus, on Sunday.

In a development that surprised no one, President Alexander Lukashenko of Belarus was declared the winner of a fifth term yesterday following an election campaign boycotted by the opposition.

Lukashenko's share was an increase from the 79.7 per cent of the vote the authoritarian leader of 21 years was reported to have won in 2010.

About 100 opposition supporters held a peaceful protest march after the polls closed on Sunday to show their discontent with the ballot.

Opposition activists also cast doubt on the high turnout, which election officials said was over 87 per cent.

"The election commissions made up the results as they wished," opposition leader Anatoly Lebedko said. "I'm amazed by the scale. They made up a staggering turnout, with half-empty polling