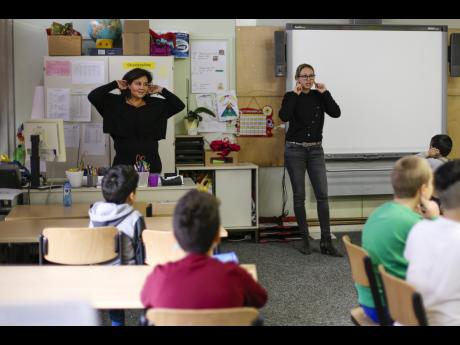 AP
Teacher Sandra Wiandt (right) and a volunteer (left) teach students of a “Willkommens klasse” (Welcome Class) at the elementary school at the Baeke in Berlin, Germany.

The nine-year-old twins from Syria are among nearly 400,000 children among a wave of up to one million migrants expected in Germany this year alone. All around the country, schools have added extra teachers and "welcome classes" to teach kids like Fadi and Fadiya the basics of German before they are integrated into regular classrooms around six to eight months later.

Fadi and Fadiya's school, located near their asylum home, will open a second welcome class in a few weeks, reflecting the massive demand for special schooling for refugee kids in Berlin and elsewhere. The Associated Press was allowed into the classroom under an agreement not to publish the children's last names to protect their privacy.

Fadi, wearing an oversized Spiderman hat, and his sister, Fadiya, with a brown ponytail and big timid eyes, were among 20 new arrivals from 11 countries in the welcome class offered by an elementary school.

On Tuesday morning, teacher Sandra Wiandt, an energetic woman with a warm smile, taught them the days of the week, colours and autumn vocabulary.

The children ages six to 12 came from Syria, Iraq, Egypt, Libya, Bosnia, Serbia, Bulgaria, Turkey, Korea, Ghana and the U.S. Not all were refugees. Some, for example, were children of parents who had relocated to Germany for work.

They got a first taste of the intricacies of the German language as they had to repeat differing singular and plural forms of words like chestnut, acorn and leaf, specimens of which they had picked up on the schoolyard the day before.