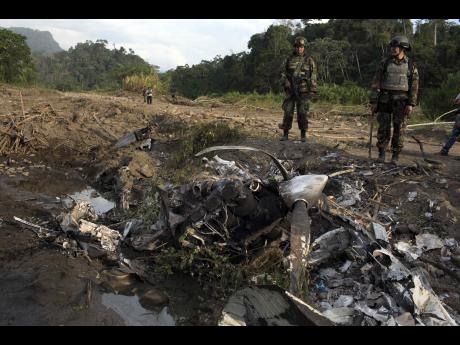 AP
In this September 19, 2014 file photo, Peruvian narcotics police stand next to a plane allegedly destroyed by residents in an effort to hide evidence connected to clandestine airstrip, in the Apurimac, Ene and Mantaro river valley, or VRAEM, the world’s number one coca-growing region.

It happens about four times a day, right under the nose of Peru's military: A small single-engine plane drops onto a dirt airstrip in the world's number one coca-growing valley, delivers a bundle of cash, picks up more than 300 kilos of cocaine and flies to Bolivia.

Roughly half of Peru's cocaine exports have been ferried eastward on this "air bridge," police say, since the rugged Andean nation became the world's leading producer of the drug in 2012.

Peru's government has barely impeded the airborne drug flow. Prosecutors, narcotics police, former military officers and current and former US drug agents said that while corruption is rife in Peru, the narco-flight plague is the military's failure because it controls the remote jungle region known as the Apurimac, Ene and Mantaro river valley.

Wilson Barrantes, a retired army general who has long complained about military drug corruption, said giving the military control over the valley is "like putting four street dogs to guard a plate of beefsteak".

Deputy Defence Minister Ivan Vega, who runs counter-insurgency efforts in the region, said that he was not aware of any military officials under investigation.

"Corruption exists, but we are always looking out for it," he said. "If we know of anyone involved, we'll throw the book at them."

But an Associated Press (AP) investigation found that "narco planes" have been loaded with partially refined cocaine at landing strips just minutes by air from military bases in the remote, nearly road-less valley where about two-thirds of Peru's cocaine originates.

Videos obtained by the AP show small planes landing on clandestine air strips in the jungle region about the size of Ireland. Elite squads of narcotics police hidden on nearby hilltops videotaped the landings, but were too outgunned to intervene, said two narcotics police officers who provided the videos, but declined to speak on the record for fear of losing their jobs. Cocaine regularly disappears aloft in Cessna 206 planeloads, each worth upward of $7.2 million overseas.