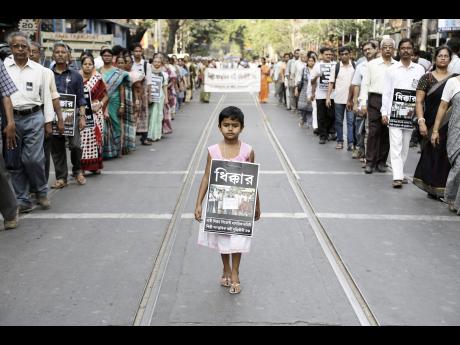 AP
A girl walks with others in a silent procession protesting a rape incident in India.

Two young girls - a toddler and a 5-year-old - have been raped in separate attacks in New Delhi, police said yesterday, in the latest incidents of sexual violence against girls and women in India.

A 21/2-year-old girl who was playing outside her home was raped in a west Delhi suburb last Friday evening, said the police.

Family members found the child lying unconscious and bleeding in a park three hours after she went missing during a power outage in the neighbourhood.

Police have detained a few men, but have not yet made any arrests in the incident.

Meanwhile, police said they were questioning three men arrested in the gang-rape of the 5-year-old last Friday evening in east Delhi.

Both girls were in stable condition at hospitals, police said.

The rapes occurred a week after a 4-year-old girl was found dumped near a railway track after being raped and slashed with a blade.

A series of recent attacks has renewed public fury and horror over India's inability to halt chronic violence against women and girls.