Koreans celebrate reunions across DMZ, 1st in more than year 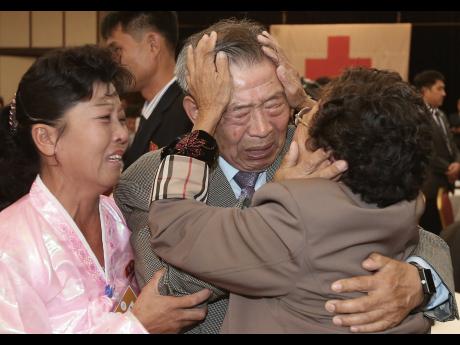 SEOUL (AP): Hundreds of mostly elderly Koreans, some in wheelchairs or leaning on walking sticks, most overcome by tears, laughter and shock, began three days of reunions yesterday with loved ones many have had no contact with since war divided the North and South more than 60 years ago.

About 390 South Koreans travelled to the North's scenic Diamond Mountain resort. Dressed in business suits, formal dresses and traditional hanbok, they brought long johns, medicine, parkas, calligraphy works and cash to give as presents to about 140 family members in the North.

The reunions, as always, are a mixture of high emotion and media frenzy. Journalists crowded around South Korean Lee Soon-kyu, 85, as she met with her North Korean husband, Oh In Se, 83.

As camera flashes bathed them in glaring white light, she cocked her head and looked with amazement at Oh, who wore a dapper suit and hat and craned backward to take in Lee.

The images are broadcast throughout South Korea, where the reunions are big news. North Korea's government, which analysts believe worries that scenes of affluent South Koreans might influence its grip on power, published a report about the reunions through its state media that said the North Korean participants explained to their South Korean relatives how their lives have been "happy" and "worthwhile" under the North's socialist system.

The deep emotions stem partly from the elderly reuniting after decades spent apart, partly from the knowledge that this will be their only chance. None of the past participants has had a second reunion.

The reunions, the first since February of last year, are a poignant yet bitter reminder that the Korean Peninsula is still in a technical state of war because the 1950-53 fighting ended with an armistice, not a peace treaty. The Koreas bar ordinary citizens from visiting relatives living on the other side of the border and even from exchanging letters, phone calls and emails without permission.