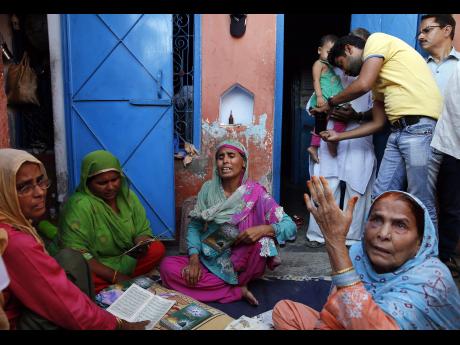 AP
Relatives of 52-year-old Muslim farmer Mohammad Akhlaq, killed over rumours he slaughtered a cow mourn, at his home in Bisara, a village about 45 kilometres (25 miles) southeast of the Indian capital of New Delhi.

Government investigators said yesterday that the mob killing of a Muslim man over rumours he slaughtered a cow was premeditated and not a spontaneous act stemming from heightened emotion and religious devotion as many Hindu nationalist politicians have claimed.

The killing of Mohammed Akhlaq in north India last month has sparked furious debate about religious tolerance within India and what role Indian politicians play in defusing or exacerbating communal tension.

Prime Minister Narendra Modi has been criticised for not saying enough, or not saying it quickly enough. Two weeks after the attack, he called it "sad and undesirable" but questioned why the central government should be expected to weigh in rather than the state government. Senior officials from his Bharatiya Janata Party described the attacking mob as "innocents" or the attack as an "accident" that was either understandable or justified.

Hindus consider cows to be sacred, and for many, eating beef is taboo.

The debate, highlighted by Indian media headlines about similar attacks and editorials on religious intolerance, has forced the nation into a period of soul-searching that many have said is needed to reaffirm India's secular