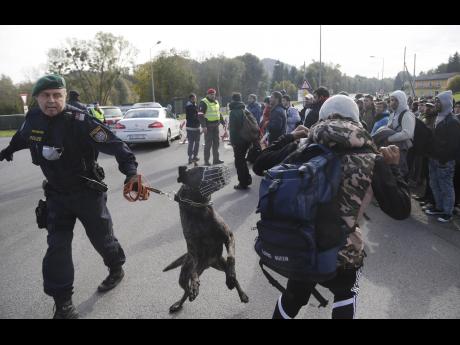 AP
An Austrian policeman with a dog tries to maintain order after migrants left a camp on the border with Slovenia in Spielfeld, Austria, yesterday.

Migrants traded punches and scuffled with police at a Serbian border crossing with Croatia yesterday, as pent-up pressures on their trek towards a hoped-for safe haven in the European Union (EU) boiled over.

The unrest at Berkasovo village subsided after several minutes but reflected frustrations of the tens of thousands of people facing long waits and other hardships as they make their way north over the Balkans each day in search of better lives in prosperous EU countries.

Further along that route, Austrian police moved to relieve pent-up pressure which they feared could lead to violence, removing barriers at an overcrowded collection point at border crossing with Slovenia. A day earlier, thousands of migrants broke through police obstacles at the same collection centre at the Spielfeld border point.

Many of the migrants spilled out of the facility yesterday but then gathered nearby following police instructions. Many others, however, walked away from the border. On the Slovene side, more than 1,000 migrants were waiting for entry, either to apply for asylum to Austria or to transit to other EU nations.

The flow of people over the so-called west Balkans route that begins in Greece has shifted. Migrants still cross first into Macedonia and then Serbia but now enter Croatia instead of Hungary, which has erected a fence along its border to Serbia. From Croatia, they move to Slovenia, which has struggled to deal with the increasing numbers.