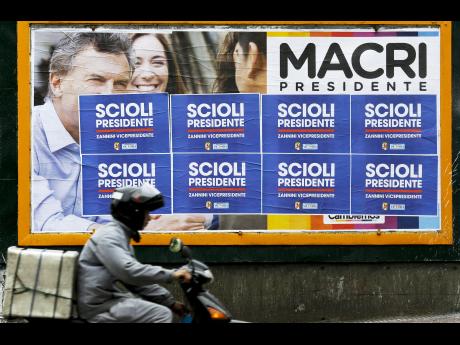 Nora Beatriz Diaz says her choice for president in today's election was essentially decided six years ago, when she was hired by a government jobs programme.

Now 55, the mother of two struggled for years to make ends meet. But through the "Argentina Works" programme created by Cristina Fernandez's government,

Diaz got a job cleaning and doing light construction.

"If I lose this job, I'll go back to zero," Diaz said. "This government has to stay in power."

That attitude helps explain why Fernandez's hand-picked successor, Daniel Scioli, is leading in the polls despite the country's many hardships: rampant inflation, a stagnant economy, and a battle with creditors that has made Argentina an international financial pariah.

Diaz is among the estimated 30 per cent of voters who political analysts say form the core of Kirchnerismo, the political movement of Fernandez and her late husband and predecessor, Nestor Kirchner.

The couple's supporters credit them with lifting the economy after a devastating 2001-2002 financial crisis while also providing a lifeline to the poor.

Today, an estimated 15 million Argentines, or about 35 per cent of the population, receive some kind of direct financial assistance from the government, according to researchers at the Catholic University of Argentina.

The programmes are so popular that leading opposition candidate Mauricio Macri, the mayor of Buenos Aires, felt compelled to tailor his campaign to take them into consideration.

Macri initially ran a pro-market campaign, promising to battle corruption and liberalise Argentina's protectionist economy, but with his poll numbers sagging, Macri in recent months has talked about achieving "zero poverty" and has promised to maintain and even increase some social spending.