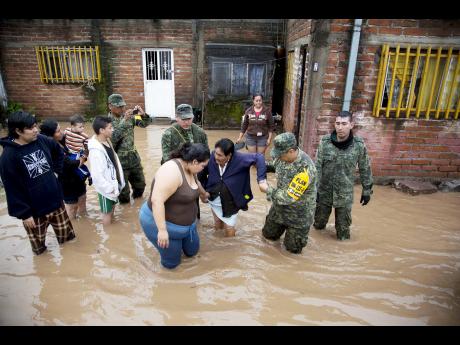 AP
Soldiers help a woman to leave her flooded house to take her to a shelter in Zoatlan, Nayarit state, Mexico, yesterday.

Patricia, which peaked as the strongest hurricane on record in the Western Hemisphere, made landfall last Friday on a sparsely populated stretch of Mexico's Pacific coast as a Category 5 storm, avoiding direct hits on the resort city of Puerto Vallarta and major port city of Manzanillo.

There were reports of some flooding and landslides but no word of fatalities or major damage as the storm pushed across inland mountains while bypassing the metropolis of Guadalajara overnight.

Residents of the coast where Patricia came ashore Friday night described an enraged sea that crashed into hotels, scooping beach away from their foundations, and howling winds that toppled trees and telephone posts.

"The waves were coming into the hotel," said Domingo Hernandez, a watchman at the Hotel Barra de Navidad in the resort village of the same name in Jalisco state.

"All the streets here in town are full of downed trees all over the place," said Hern·ndez, who described Patricia as the strongest storm he has seen in a quarter century of living on the coast. "You have to make your way around all the downed telephone poles, the power lines, the trees."

People snapped selfies next to a sculpture overlooking the sea and business owners swept sidewalks as they would on any morning. There were puddles downtown, but nothing more than a passing thunderstorm might leave.