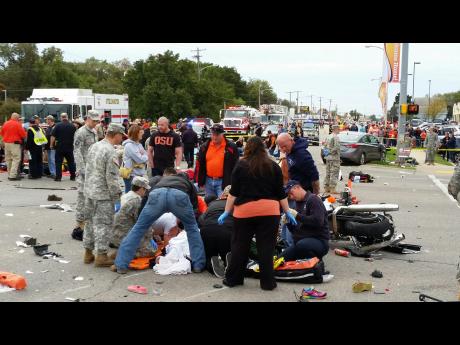 AP
Emergency personnel and spectators respond after a vehicle crashed into a crowd of spectators during the Oklahoma State University homecoming parade yesterday.

Twenty-five-year-old Adacia Chambers was arrested on a charge of driving under the influence of alcohol or other drugs (DUI) yesterday after her car crashed into a crowd of spectators during the Oklahoma State University homecoming parade, killing three people and injuring nearly two dozen others.

Stillwater police captain Kyle Gibbs said the woman's sedan ploughed into an unoccupied motorcycle of an officer who was working security at the parade, then into the crowd.

Dave Kapple of Houston told the Stillwater News Press that he and his son were about 10 feet away when they saw the vehicle barrelling into the crowd.

"We heard somebody scream, 'Look out!.' (The driver) ploughed through a police motorcycle and then a crowd of people," said Kapple. "People were flying everywhere."

Konda Walker, from Anchorage, Alaska, was attending the festivities ahead of the homecoming game.

"At first we thought it was part of the show," Walker told the News Press. "People were flying 30 feet into the air like rag dolls."